Posted at 20:38h in News by Kim August
Share

“You’ve been hurt by my needles.

You trying to get yourself killed?” 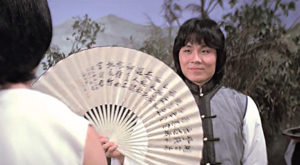 Highly intelligent, he is a keen observer. Gao infiltrates in the most insidious way, stoking the good graces of Shaolin warriors with attention and gifts before eradicating them.

Traditional Weapons include three poison needles and a trident.

In Two Champions of Shaolin, Gao is the most successful Shaolin destroyer within the government-backed Wu Dang clan. Posing as wealthy scholar Gao Xuiwen, this manipulative agent fools the title heroes Hu Huigan (Chiang Sheng) and Tong Qianjin (Lo Meng) into thinking the lavish attentions he throws upon the Shaolin warriors is a sign of friendship. While Tong shows off his strength, Gao immobilizes the younger man with those poison needles before unleashing a three-pronged attack with that trident.

With the Jin family extinguished, can Gao Jinzhong complete his mission and kill the Shaolin rebels?

You can watch Two Champions Of Shaolin online on: iTunes, Google Play, Microsoft, YouTube, and Amazon.

When she is not watching, tweeting and flexing her pen fu about Shaw Brothers movies, Kim August is channeling her writing qi into articles for shaolinchamber36.com.