Posted at 19:42h in News by Celestial Pictures
Share 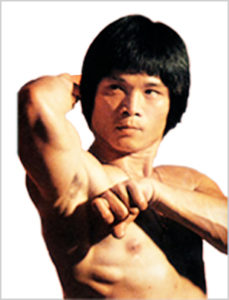 Born in Taiwan on October 21, 1945, Kuo is also known as Philip Kwok. Originally an agile circus acrobat, he entered the film business by chance.

His performance in Boxer Rebellion caught the attention of director Chang Cheh, who invited him to play the lead in Marco Polo. He came to Hong Kong in 1976 and joined Shaw Brothers as a basic actor. After The Five Venoms in 1978, Kuo had been the male lead and martial arts choreographer in various films, including The Rebel Intruders, The Flag Of Iron, The Sword Stained With Royal Blood and Ode To Gallantry. 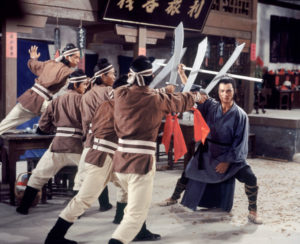 Kuo fights off a handful of men in “Crippled Avengers”.

Kuo Chue’s skills and his undeniable Charles Bronson tough guy charisma had him regularly playing the lead “heroic” Venom. Besides being an actor he also served as action choreographer for many of the Venom films as well as other Shaw Brothers productions after the Venom gang disbanded in 1982.

With the support of Chang, Kuo went back to Taiwan in 1981 and founded a film company with his Taiwanese colleagues Chiang Sheng and Lu Feng. One of their productions was Ruthless Tactics, which Kuo starred and directed himself. Like so many kung fu actors his career slowed down considerably with the demise of that genre in the 1980s and for a while his career was pretty much restricted to TV as both actor and action choreographer.

Some of his signature works are Peacock King, Hard Boiled, A Chinese Ghost Story and The Touch. 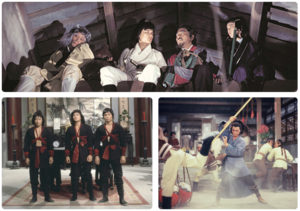 Kuo in (from top to bottom, left to right): “The Brave Archer 2”, “Marco Polo”, and “The Crippled Avengers”.