11 Apr The Heroic Ones (1970), A Brief Look into Ku Feng’s Heroic Performance By Kim August

Posted at 00:31h in News by Kim August
Share

When one thinks of The Heroic Ones (1970) Chang Cheh’s barbaric take on sibling rivalry gone awry, you might not consider the performance of Ku Feng as the ruler of Shantou, Li Ke Yong.

As Ku would often demonstrate throughout his long career at Shaw Brothers, his acting talents are vast. Ku becomes the character, and in many films, he often adds acute sensitivity to his hard-edged men. 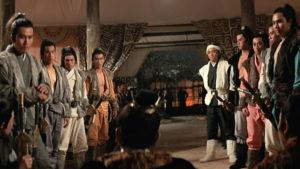 Li clearly loves his 13 sons (natural and adopted), but he also enjoys his position. Ku effortlessly shifts between a seemingly uncivilized barbaric warlord and doting father, but he does not suffer fools. Li will back his sons against the same government who granted him special favors (much to the chagrin of the warlord Zu Wen.)

While Li Ke Yong often gives orders to his sons go forth and conquer, he is a man of some scruples. Guest or son, do not offend him.

For me, Li’s most powerful moments come as a result of the death of his 11th son (the natural born, swaggering Jing Si (Ti Lung)) whose self-sacrifice pushes King Li near the edge. The admonishment Ku gives David Chiang’s Chun Xiao during the brief moment of mourning, feels very real and painful.

Ku, a true thespian, could play his roles subtle or over-the-top depending on the material and director. Here, Chang Cheh allows him free reign to explore both extremes. It’s a delight to watch Ku fully embrace this surly, but loving warrior.

When I see Ku Feng, I see one of the preeminent faces of Shaw Brothers. This venerated actor never fails to delight, and his splendid performance here often overshadows his younger co-stars.

The Heroic Ones is now available with Prime Video.