Posted at 22:45h in News by Matt L. Reifschneider
Share

For my latest obsessive cinema binge, I decided to spend a good portion of September (aka #Shawtember) revisiting and acquiring new Shaw Brothers movies that feature Derek Yee in them. While Derek Yee came on rather late into the Shaw Brothers fold in the mid and later 70s, his quick rise to lead actor status cannot be written off as coincidence. He’s too often overlooked by many fans as inferior to the likes of other iconic Shaw Brothers stars like David Chiang, Ti Lung, and Gordon Liu, but don’t assume that’s because he is inferior. In fact, when it comes to many of the wuxia films of this era, Derek Yee is something of an ace in the sleeve and one of their major selling points. His ability to emote the kind of forlorn emotions of a man slighted is matched with a charming youthful aura that makes him an actor perfectly suited for the wuxia genre he became popular in. For this brief article, I wanted to take a look back at five of his best roles in wuxia films for the Shaw Brothers studio. Hopefully, this will help some of you out there in your exploration of his Shaw Brothers career. Not all of the films or the roles that he was in are great, but these are a handful that some fans should take a look at again to see why Derek Yee is an underrated hero onscreen for the time period.

So without further distraction, here are my five picks for my favorite Derek Yee performances:

This was one of the films that I recently watched in my Shawtember binge and it was a huge surprise. Not only was the film thoughtful in its execution of its themes about manipulation, but Derek Yee steps into the picture as a formidable villain for the heroes of the film. He’s something of a puppet master role in this one, delivering monologues about strategy and inferiority like its second nature to him, and he owns in the role only occasionally leaping in with his colorful wardrobe to meet swords with his enemies. Derek Yee has played a villain a few times in his career, another notable role is that of the blind swordsman in Legend of the Bat, but this is easily his most layered and impactful performance as an antagonist.

Generally speaking, Shaolin Intruders gets massively overlooked by far too many martial arts fans. The film itself is rather gimmicky, riding at a breakneck pacing that focuses perhaps a bit too much on plot and extensive action set pieces, but it does have some massively entertaining characters – including Lei Xun. Derek Yee ably portrays the wandering swordsman who gets caught up in a diabolical scheme by masked murderers and thieves, but it’s his dry and traditional wuxia hero role that holds a lot of the heart for the film. Occasionally he is upstaged by his co-star Jason Pai Piao who oozes charisma as his gambling friend, but their chemistry onscreen carries a lot of the burden of the film’s character work and Derek Yee balances out his co-star in impressive ways and it makes it one of his best roles.

Ding Peng and Derek Yee’s portrayal of the character are one of the main reasons that Full Moon Scimitar works at all. Another Chor Yuen wuxia, this film requires that Derek Yee sell a lot of rushed character traits – his falling in love, his attempts at regaining his honor, and just his acceptance of the supernatural elements of the film. He has to cover a lot of character arc in a short movie and he pulls it off with a substantial amount of grace and connection with the audience. The writing is not always his friend, particularly in the opening act, but he sells it and sells it hard. Derek Yee has always been an actor to work the soul torn hero and he does it with pride in this film.

He’s not even the lead character in either one of these films, that is given to the talented Ti Lung, but he’s one of the major secondary roles of Ah Fei, something of a feral kung fu warrior with little concern in the way of the plot outside of paying off his debts and helping his friend out. I would have never pegged Derek Yee as one to be a rough edged loner, as he usually pulls off a more thoughtful and regal character in most of his films, but he does it here. He’s impeccably charming and bringing him back in the second film is key for its success (and improvement over the original). Every time he shows up on screen it’s a delight as he comes off as honest and upfront, showing a bit of his range in doing so. 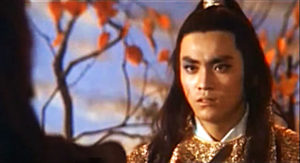 Again, perhaps it’s my own bias for the film overall, but Death Duel is one of those films that seems horrendously misunderstood by too many fans. It’s not nearly as entertaining as some of Chor Yuen’s other wuxia epics, but what it lacks in extensive martial arts spectacle in makes up for in effective character build and execution of its plot. Much of the film’s success does lie on Derek Yee’s shoulders since the film seems more intent on his character and his journey than anything else and as I said before he pulls off the soul torn hero quite well, which is on full display here. In the role, Derek Yee is emotive and efficient, whipping from heartfelt dialogue to fight sequences that aptly portray the character’s hesitation towards violence in a nimble manner. The film may not be everyone’s favorite, but for my money, it’s the best role for Derek Yee and his performance nails it.

So there you have it, those are my picks for the five best Derek Yee roles in Shaw Brothers films! Of course, it hardly touches the surface of what he’s accomplished as an actor and all of these kinds of lists are up to the viewer to decide. Do you think I missed a great role? Picked one that should have never made any list? Let us know what you think, check out some of these golden cinematic gems, and throw us your recommendations!