Celestial Pictures | The Delightful Fighter, a brief look at the Choreography in The Delightful Forest (1972) by Kim August
16907
post-template-default,single,single-post,postid-16907,single-format-standard,vcwb,ajax_fade,page_not_loaded,,qode-title-hidden,qode-theme-ver-9.1.3,wpb-js-composer js-comp-ver-5.0.1,vc_responsive 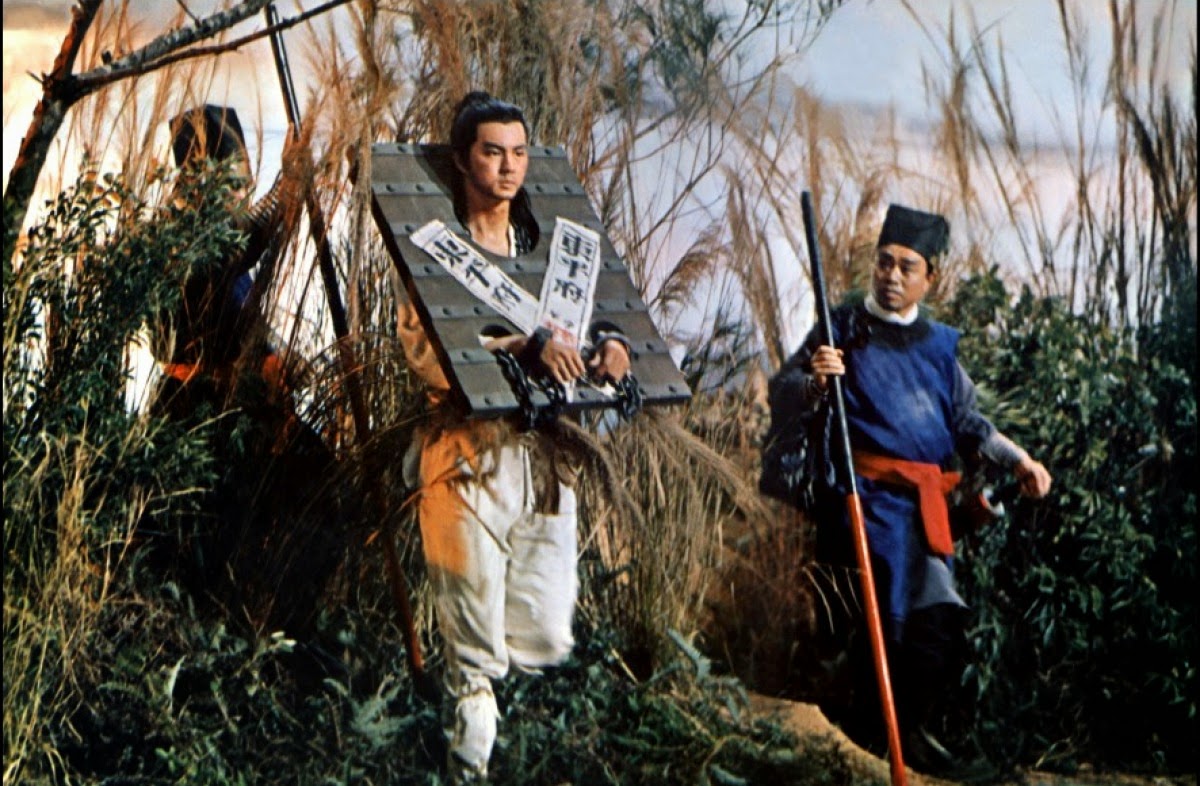 Posted at 20:13h in News by Kim August
Share

Portraying a character as legendary as The Water Margin’s Wu Sung meant Chang Cheh and Pao Hsuen-Li cast an agile young actor whose martial arts skills, stamina, and presence would prove as epic as the story itself.

Ti Lung was an inspired choice for all the above qualities and his energetic enthusiasm. Under the guidance of four action directors (Lau Kar Leung, Lau Kar Wing (whom Ti would fight), Tang Chia and Chen Chaun), Wu Sung engages in several inventive kung fu showdowns throughout the film. Taking Ti Lung’s martial arts training into account,  the quartet of fighting instructors made sure to showcase their star’s formidable kicking talents. They do this by putting Wu Sung into increasingly tight situations, which immobilize his limbs.

I will cover two favorite showdowns here. These occur almost back-to-back within the opening reel and display the variety of styles the action directors deployed. Even better, these fights leave you wanting more of Wu Sung’s vibrantly heroic kung fu.

We are introduced to Wu Sung’s hero as he tracks down the second of his brother’s murderers, Ximen Xing (Lau Kar Wing). Wu wants one thing: to exact revenge. What is most interesting about this fight is how traditional it is. Depending on his adversary’s agility, Wu deploys fists and a blistering round of kicks to subdue Ximen allowing Wu to kill his foe. A gifted kicker, Ti delivers a variety of legwork in this sequence.  Two highlights of his footwork include a rapid sweep of his right foot back and forth between Lau Kar Wing’s legs, forcing the stuntman to the ground. Not forgetting the fight-ending move known as The Mandarin Duck Kick (Ti would use this kick throughout his career at Shaw Brothers.)

Lau Kar Wing –an excellent fighter, actor, and stuntman- naturally gives room to his leading man, but not without getting in a few licks of his own. Ximen Xing’s blocks and lunges keep the duo moving as they destroy a good portion of the restaurant’s furniture.

After freely admitting his crime of murdering Ximen Xing and his adulterous sister-in-law,  two constables escort the cangue bound Wu Sung to prison.  They stop at a local wine bar, whose lovely proprietor the deadly “Witch” Sun Er Niang takes a liking to the military instructor’s satchel.  Our hero takes offense, promptly defending himself while bound in the cangue. Wu’s arms and upper body almost immobile, this situation only forces the young warrior to put his best foot forward.

If any of the epic battles in this movie have Tang Chia’s (Tong Gai) stamp on them, I will wager it is this one. A student of the Peking Opera, Tang was used to taking whatever object was available and using it as a weapon. As we’ve already seen Wu Sung’s punching and kicking prowess, this second fight foreshadows the obstacles our hero would overcome in later battles.  His arms bound, Wu Sung uses his masterful kicking skill, the cangue, and shackles to taunt and batter the Witch and her house staff.  This exchange is the most playful of the kung fu displays in The Delightful Forest and a scene I frequently revisit.

Incidentally, this isn’t the only time Wu uses the cangue as a weapon.

I’ve watched enough of Ti Lung’s Shaw Brothers work to notice how controlled he is when fighting cast mates and stunt people.  Here, he has to pretend to be drunk while thwarting the sword wielding Witch and her cronies. One notable move involves Wu wrapping his ankle shackles about Sun Er Niang’s throat.

Ultimately, Sun Er Niang’s husband Zheng Qing comes to the rescue, and upon learning Wu Sung’s identity, the groom promptly apologizes. Naturally, our hero Wu does the same. Soon after, Wu is off to prison.

As the melees between Wu Sung and the new criminal boss of the Delightful Forest mount, the choreographers keep inserting new ways to thwart Ti from using his hands, feet, and weapons simultaneously. These constant obstacles make us root for Wu Sung and applaud this military instructor’s profound expertise in armed and unarmed combat.

The many martial skills Wu deploys here are as much of his heroic character as his honorable code. The choreographers’ mix of traditional punching, kicking and sword styles comingle with operatic agility and surprise. The result: Truly delightful.

The Delightful Forest is now available with Prime Video.