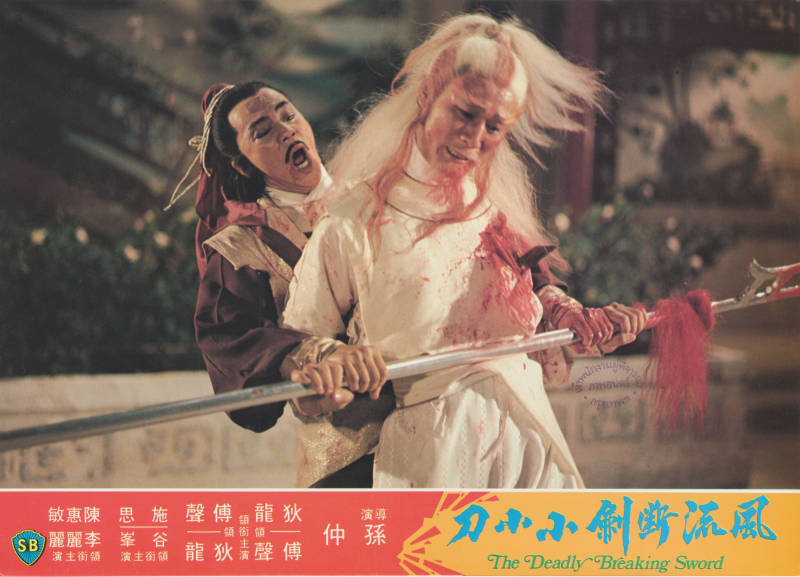 05 Aug THE DEADLY BREAKING SWORD, STATUS IS THE BIGGEST PRIZE BY KIM AUGUST

Posted at 00:13h in News by Celestial Pictures
Share

In The Deadly Breaking Sword, director Sun Chung places reputation above all else. This desire for rank and status ripples off the quartet of men who dominate this tale.

For Tuan Chang-Qing the Deadly Breaking Sword, his many duels are a minor war against any who “defy” him. He arrogantly flaunts his martial successes to all comers, tells a woman he will not hear her insults (i.e., the truth about him), and plants himself upon a pedestal as his unique sword style is quite effective. While appearances suggest a gentleman, Tuan gloats and endlessly mocks those beneath him, offending all sides. His barbed words are a  psychological stab which can be as painful as the title sword technique. Indeed, this taunting is pivotal to his success on and off the battlefield.  Though this sword twirling peacock is humiliated several times, his cool reputation remains intact.

Sun Chung was fond of exposing the flaws of the elite, and in Tuan, the director offers a humorous precursor to the awful one-upping swordsmen from Human Lanterns (1982). One look at Tuan Chang-Qing’s galloping gait seen during those duels is not unlike his prized stallion; haughty and majestic. Indeed, Ti Lung’s playfully snobby turn as Tuan makes him something of an epic jerk, which is partly why Chen Hui-Min’s turn as Lian San, The Throat Piercing Halberd, becomes so compelling.

In a movie rampant with unlikable characters, it is Lian San who feels the most human, and for me, remains this story’s most fascinating character. The Throat Piercing Halberd is the guy we’re supposed to be rooting against, and yet, Tuan’s constant strutting turns the tables. Vulnerable, dangerous, and single-minded Lian San will do anything to regain his fearsome reputation. Sun Chung and screenwriter Ni Kuang would warp this broken swordsman into something more horrific in Human Lanterns, but here, The Throat Piercing Halberd is not quite the super villain he almost mimics. Instead, there is a thoroughly dangerous wounded warrior who only wants to restore himself to glory.

Of our three martial artists, the last is Xiao Dao, the Little Dagger. Fu Sheng’s young gambling addict nimbly reveals his dexterity with a sword, while his provoking tongue annoys just about everyone he crosses. The youth dreams for wealth and prominence in the martial world; he wants to be just like Tuan. Xiao Dao desires that golden reputation, but his addictions keep him stuck in the same rut.

And the man who pits this trio against each other is none other than the “Killer Doctor” Guo Tiansheng. Ku Feng cooly manipulates the more experienced fighters mentioned above, while his constant retinue of bodyguards ensures his lofty lifestyle and status. He will do anything to preserve his place and wealth in the world including killing people who get in his way.

How these men react to each other and their ongoing change of fortunes is one of many reasons why The Deadly Breaking Sword is among the best wuxia Shaw Brothers produced. Add the near role reversal of Ti Lung and Chen Hui-Min’s duelists, and you’ll see another unique take on vengeance trail courtesy of director Sun Chung.

When not rooting for Lian San, Kim August can be found flexing her Pen Fu at ShawBrothersUniverse.com, along with writing, ruminating and drawing on her Shaw-centric blog.