Posted at 18:13h in News by Gary Williams
Share

When you have a shipment of gold there’s bound to be some conflict. When viewing Chang Cheh’s superhero-like masterpiece The Kid with the Golden Arm we are treated to the ultimate showdown between good and evil. Make no mistake this is no ordinary scuffle; this conflict has major ramifications for the martial world and some needy famine victims. Broadsword expert Yang Hu Yun (Sun Chien) has assembled a very formidable team to deliver the gold to the famine victims. Let’s take a quick look at his squad: 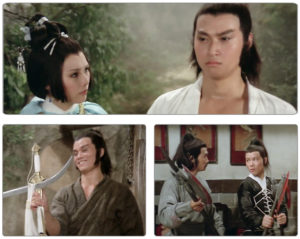 Long Axe Yan Jiu (Suen Shu Pau)-Long Axe is an experienced fighter in the martial world. As his name suggests he is deadly with the Long Axe and can think quickly when the need arises.

Swordsman Li Qing Ming (Wei Pei)- Arrogant, proud and stubborn Li is also an expert with the straight sword (jian) and has internal control skill(qigong). His excellent swordplay and heroic deeds are known throughout the martial world.

Heroine Leng Feng (Helen Poon Bing Seung)-Ms. Leng is more than the girlfriend of Swordsman Li, she is a skillful swordswoman with a quick draw and pinpoint accuracy. Although Ms. Leng appears to be somewhat demure she is a member of the martial world and lives by the code in that world.

Agent Hai To (Phillip Kwok Chun Fung) – The most skilled fighter on the side of Yang’s Escorts Hai To is comfortable using empty hands or weapons. Hai also has a keen detective-like mind and is able to think ahead of his adversary. Since his best friend is the wine, look out when he has a jar or two.

While the aforementioned line-up would make any ordinary gang shake in their kung fu boots the Chi Sha Gang don’t even bat an eye. The Chi Sha consists of four chiefs who are willing and able to take on Yang’s Escorts in order to get the loot:

The Seven Hooks, though skilled, are no match for Long Axe Yan Jiu and Short Axe Fang Shih.

The Seven Hooks– These masked men are vicious and sneaky. They have a reputation for brutality and surprise attacks. The hooks they use are gruesome and deadly; the mention of their name strikes fear into the hearts of the martial world.

Brass Head (Yeung Hung)- Brass Head not only possesses a bone crushing head butt, he also uses his incredible strength to break necks and crush opponents. Brass Head can run through several adversaries at a time and is immensely loyal to the cause of the Chi Sha Gang. 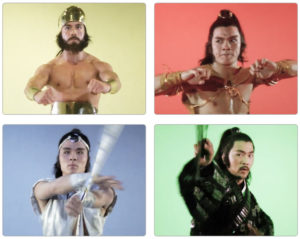 Iron Robe Wei Lin (Johnny Wang Lung Wei)- A totally ruthless killer who will stop at nothing to achieve his goal, Iron Robe’s armor protects his torso from weapons while his iron fan slices and dices whomever is foolish enough to get in his way.

Silver Spear (Lu Feng)- An incredibly agile and acrobatic fighter Silver Spear’s dexterity with the spear is second to none. Additionally, Silver Spear is a master of disguise with an active and cunning mind. Couple that with his mastery of the spear technique and he becomes a much more dangerous opponent to whom he counts as an enemy.

Golden Arm (Lo Meng)- The leader of the Chi Sha Gang, Golden Arm is a legend in the martial world. His arms are immune to weapons, he is fast, strong, and totally skilled in the use of kung fu. His gang is ruthless, he commands loyalty and is feared through his reputation alone. Golden Arm is one of the best fighters in the martial world. He is supremely confident in his ability to bring anyone to their knees (or to their death if he wishes).

As in any conflict there is always a potential for things to go awry. In the battle of Yang’s Escorts versus the Chi Sha Gang a wildcard exists that is only spoken of in whispers. His name is Iron Feet. His was once known for his kicks, which killed many men long ago. It is rumored he also wants the gold but no one has heard from him in many years…

Gary Williams has been an avid Classic Kung Fu movie fan since he was 7 years old. He writes for the blogs Film Fan Dojo and  The Dojo Fight Masters. He can be reached at filmfandojo@gmail.com