Celestial Pictures | RZA’s Live Score Of ‘The 36th Chamber of Shaolin’ Reveals An Artist In His Element
16572
post-template-default,single,single-post,postid-16572,single-format-standard,vcwb,ajax_fade,page_not_loaded,,qode-title-hidden,qode-theme-ver-9.1.3,wpb-js-composer js-comp-ver-5.0.1,vc_responsive 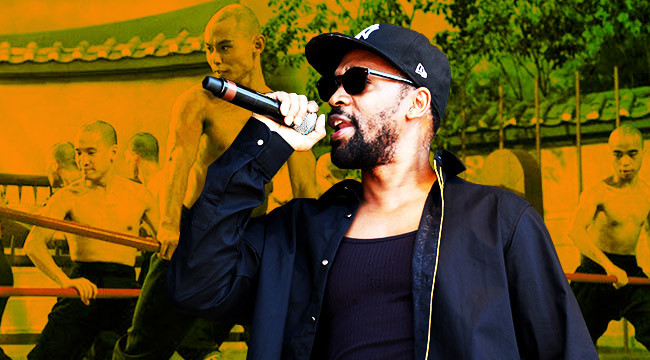 Posted at 21:48h in News by Celestial Pictures
Share

Since their inception, Kung Fu movies have played an integral part in the sound and culture of The Wu-Tang Clan. While the film genre has had an impact on hip hop since the 1970s, The Wu-Tang Clan were the first to make it central to their group’s philosophy. The Wu-Tang’s de facto leader, RZA, cites The 36th Chamber of Shaolin as a particularly strong influence on him growing up. “Beyond the Kung-Fu, it was the reality of the situation that hit me,” he said. “Growing up as a black kid in America, I didn’t know that kind of story had existed anywhere else.”

One night, roughly 18 months ago, the idea came about to have RZA re-score all the music for the movie that had so much of a formative impact on him, while leaving the original dialogue and sound effects intact. After a year-and-a-half of meticulous planning, the Alamo Drafthouse helped make it a reality with RZA: Live From The 36th Chamber Of Shaolin, which made its debut at the Stateside Theater in Austin, Texas, last Thursday night. For two uninterrupted hours, RZA used his 20-plus years of sound archives like an arsenal, while meticulously composing an all-new soundtrack for the film, from the first frame all the way to the last.

RZA walked onto the stage to a round of applause from a packed house of about 300 people, and took some time to explain how important the Kung Fu genre was to him, and how it was central to the inspiration for the Wu-Tang Clan. Then, just before the lights were dimmed, he declared that tonight he would give “[his] sound back to the Kung Fu movies.”

Right from the opening credits, RZA’s take on the film was apparent, as star Chia Hui-Liu’s iconic, choreographed fight sequence, which had been accompanied by a much more conventional orchestration was now adorned with a fairly sparse, infectious bass-heavy backbeat and slight, wandering piano riff that set the tone for what was to come.

While the movie began to unfold, RZA’s score was perfectly measured, weaving its way in and out of scenes, pausing on occasion just long enough to let the dialogue help punctuate the importance — or humor — of the moment, before dropping back in-step with the movie. At times the score would be so prominent it swallowed up the ambient sound of the movie, piling on layer after layer that, when stopped, would leave an almost deafening silence.

RZA himself is no stranger to music in film — he’s composed soundtracks on movies like Kill Bill Vol. 1 and Ghost Dog, along with directing and scoring his own Kung Fu odyssey, Man With The Iron Fists, and its sequel. But there’s something about seeing and hearing) the man piece together a soundtrack live on stage that helped give real insight into where his own sound came from. The movie’s natural rhythm seemed to effortlessly complement the music, while RZA would alternate between new compositions and familiar hooks from Wu-Tang classics like “Bring Da Ruckus,” “C.R.E.A.M.,” and “M.E.T.H.O.D. Man” throughout.

Most of RZA’s sonic landscape came from his personal archives, but he wasn’t afraid to throw an occasional curveball into the mix, including clips of old ’70s-era soul songs and, most surprisingly, a sizable excerpt from an old Ronettes tune, though he never left anything without an accompanying breakbeat. He’d also also throw in a handful of modern sounds, like the cocking of a gun barrel or the blaring of a police siren, echoing his sentiments bout his connection to the story, further casting his long shadow over a film that had been so formative for him.

A few surprises aside, RZA’s score was overall pretty conventional, revisiting familiar melodies, giving characters and settings their own distinctive themes, and relying on moments within the film for cues, like quick edits or the gesture of a particular character. While most played off without a hitch, there where a few transitions that would awkwardly overlap, though as an artist who seems to embrace the untidy, it was hard to tell if this was a minor misstep, or something that he’d done intentionally.

By the time the movie reached its climactic final sequence, he was letting in fragments of the original score creep through the margins, which he would then work into the music he was making on stage. It reminded viewers of the stark contrast between the original soundtrack and the one that was being assembled onstage, even giving a sense of completion to the now-38-year-old Kung Fu classic.

After the credits began to role and the crowd stoop up in a round of enthusiastic applause, RZA said a few words about the experience.

“I’ve seen that movie about 300 times, and it never loses its magic,” he began. “Like I said, it was a privilege for me to have the Wu-Tang soundtrack as the backdrop of this film, a film which inspired us. You know, many days we cut school to smoke weed and was watching this motherfucker. I hope you learned something from it. I hope you guys picked up not just the martial arts aspect of pressing things and hard training, [but] to me it was like a man with a determination, you know what I mean? He had to come back and take care of some business. This film was made in 1978, and I think it still holds its weight. Thank you gods for helping me spread the 36 chambers. I want to thank the Shaw brothers, and I look forward to coming back and get to play again. Thank you, Austin. Thank you. WU-TANG!”

RZA will be performing RZA: Live From The 36th Chamber Of Shaolin live again on October 10th at the Beyond Fest in Los Angeles.

This article was originally posted on Uproxx.com.