Posted at 18:54h in News by Kim August
Share

The assassin character was a staple of Chang Cheh’s wuxia pian since the 1967 film starring Jimmy Wang Yu. Among the most intriguing assassins in Chang’s filmography are the morally just killers known as The Rambler. These are Jian Nan (David Chiang) in The Duel (1971) and Yan Xiu, the White Robed Rambler (Lung Hsiang-Tien) in 1980’s The Flag of Iron. The Ramblers retain their unique moral code, add a dangerous air of death to the films, and in appearance and attitude, reflect the real world around them. Without the Ramblers, the heroes Ren Jie and Iron Leopard would not embark upon their heroic paths.

Jian Nan and Yan Xiu are fiercely loyal to their codes of honor. When both men realize their latest hit brought ruin to the hero and good clan, the Ramblers take great pains to undo the damage they’ve wrought. Used by their employers, the Ramblers’ reputations become meaningless, so they strive for an honorable death. In seeking a noble demise, the assassins reclaim their honor while allowing Ren Jie and The Iron Leopard to avenge their fallen masters. 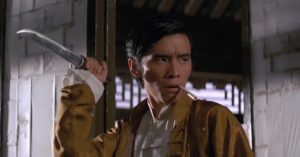 The Ramblers add an otherworldly feel of death to these stories. Aided by the shadow-filled cinematography and a flowing, ghost-like choreography, Jian Nan’s Rambler cuts through his enemies like a spectral reaper. Like the raven who caws just before someone dies, this agile killer announces death with a nasty cough. Everyone pauses when they hear that rattle, knowing someone in their number will soon die. With Yan Xiu, Chang Cheh positions his reaper center stage, not lingering in the shadows. Clad in white, the color of mortality in China, Yan Xiu’s bold appearance heralds death. Like Jian Nan, the action stops for a moment when The White Robed Rambler pops into frame. When he kills with his spears, Yan’s icy demeanor never waivers. Remorseless, the White Robed Rambler leaves a precise trail of death in his wake.

As with several Venoms Mob films, The Flag of Iron is full of playfully colorful characters and sets, yet all attention shifts to the dangerously slick Yan Xiu whenever he’s on screen.

Beyond the movies, The Rambler characters also reflect the look and attitude of the era’s rebel youth culture.

While David Chiang’s Rambler works during the Republic era China, Chang Cheh and Chiang himself fed into the mod-counterculture look of the time. Chiang’s big collared shirt, his longer hair and slick attitude speak of a young man who only follows his rules, not that of any established authority.

The White Robed Rambler wears the famous Shaws’ wuxia pian long ponytail with a difference. Lung Hsiang-Tien donned Elvis-like sideburns early in his Shaw Brothers career, and along with his Elvis-like pouty smirk marks Yan as someone other than the typical martial world character. These physical traits tie into his swagger and singular attitude, echoing in the “Me Generation” young man of the late 70s.

Most importantly, The Ramblers are fun tweaks on the assassin archetype. Their moral code, deathly auras, and striking appearance help the Ramblers stand out in The Duel and The Flag of Iron while retaining the heroic elements so essential to Chang Cheh’s movies. The Ramblers make you root for them and the main heroes too.