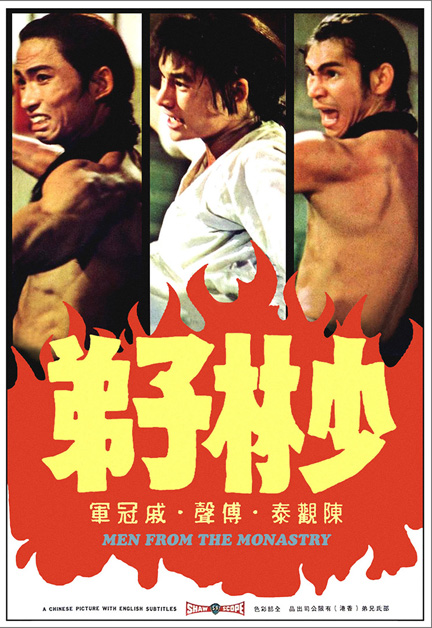 Posted at 23:24h in News by Celestial Pictures
Share

Of all the wonderful directors in the Shaw Brothers stable, Chang Cheh is my favorite. His sense of storytelling and his eye for action are impeccable, but what continually impresses me the most is Chang’s artistic drive. In Chang Cheh: A Memoir he writes of not wishing to stagnate within a genre, but to instead look for something untouched to bring to the screen. He innovated and influenced the Hong Kong film industry many times over, but one of the crowning achievements of his career is the Shaolin Cycle of films.

Men from the Monastery serves as both prequel and sequel to the first film in the cycle, Heroes Two, and it fleshes out the struggle of the Shaolin rebels exceptionally well. It shows us how Fang Shih-Yu (or Fong Sai-Yuk), played wonderfully by Alexander Fu Sheng, came to be the man we meet in Heroes Two, and it shows that along the way he met up with a passionate, vengeance-driven man named Hu Huei Chien (Chi Kuan-Chun in his debut role). Fang’s influence sends Hu to seek training at the Shaolin Temple, after which we rejoin Hung Hsi-Kwan (Chen Kuan-Tai) to venture forth into the sequel territory.

I had always heard the story that the Shaolin Cycle films started with a conversation between Chang and Lau Kar-Leung. Chang asked Lau how they might make better martial arts films. Lau suggested incorporating more real martial arts, specifically the Hung fist that he was well-versed in. But during my preparations to write this piece, I came across a passage in Chang’s memoir where he disputes this story, saying that it was actually a conversation with Michael Hui that led him to start on the Shaolin films. Whatever the reality is, the influence of Lau Kar-Leung on Chang’s Shaolin films is undeniable.

Lau’s work on Men from the Monastery (along with frequent collaborator Tang Chia) is among the best choreography of 1974. The film is packed with excellent and varied action. Just within the first few minutes, Fu Sheng battles his way through the dreaded Wooden Man Alley of the Shaolin Temple, and then he takes on a local Manchu ruffian atop wooden poles with deadly bamboo spikes below. The choreography is tight and intricate, and while Men from the Monastery is probably the least of the Shaolin Cycle films, the fights are well above the standards of its other contemporaries. Lau’s passion for the Hung fist and other Shaolin arts was unmatched and he continued the pursuit of bringing real martial arts to cinema screens in his years as a director (which coincidentally started because of a falling out with Chang Cheh over artistic differences on the following year’s Disciples of Shaolin).

It is hard to imagine martial arts pop culture without a strong Shaolin presence, and Chang Cheh’s Shaolin Cycle was a trailblazing series of films that helped bring Shaolin to the forefront of the genre. Men from the Monastery may not be a top-tier Shaw title that everyone knows, but it is an excellent slice of entertainment worthy of attention and reappraisal by fans and critics alike.