Celestial Pictures | Master of None, Master of All: Understanding the Instructors in Sun Chung’s The Master Strikes Back and The Kung Fu Instructor By Kim August
17349
post-template-default,single,single-post,postid-17349,single-format-standard,vcwb,ajax_fade,page_not_loaded,,qode-title-hidden,qode-theme-ver-9.1.3,wpb-js-composer js-comp-ver-5.0.1,vc_responsive

09 Oct Master of None, Master of All: Understanding the Instructors in Sun Chung’s The Master Strikes Back and The Kung Fu Instructor By Kim August

Posted at 22:02h in News by Celestial Pictures
Share

If you’ve watched Ti Lung’s wuxia performances for director Sun Chung, you’ll note a fascinating common thread in how each of these men thrives or dies in their environment. For this piece, the focus is on two opposites: Instructor Tong from the harrowing The Master Strikes Back (1984), and Master Wang Yang, the epitome of the noble teacher in The Kung Fu Instructor (1979.)

Sun Chung’s favorite theme explores how good and bad people deal with the criminal world around them. In Ti Lung’s case, his four martial warriors for the director went through different arcs, with only one emerging unscathed.

The unscathed man in question would be the “selectively stubborn,” yet gracious, Master Wang Yang from The Kung Fu Instructor. Wang selflessly wishes to pass along all of the training and love he learned to his students. Any man with a good heart and the desire to learn kung fu can be a pupil. In Wang’s eyes, kung fu could only thrive if students were taught the full measure of the particular style. As a result of his unorthodox school, Wang attracts the attention of the nefarious Meng clan who mean to use Wang to educate their young thugs to ultimately wipe out the Zhou clan. No matter how hard Meng tries to bribe or break Master Wang, this disciple of kung fu remains true to himself, refusing to yield.

The same cannot be said for combat instructor Tong as he and his son Xiao Feng make the massive mistake in taking a training job in Phoenix Town. Tong and his boy are already at odds given the loss of Xiao’s mother. So, Tong cannot reel in the youngster once they arrive in this wonton village where a corrupt and totalitarian police precinct holds sway. Almost immediately, Tong cowers before Chief Constable Jin who promptly targets father and son to gain even more power. Tong is not who his wayward military students think (Tong may project the image of a kung fu master, but his morals are not rigid like Wang Yang.) It will take the unthinkable to make Tong stand up to Jin and his nefarious “peace” keepers. 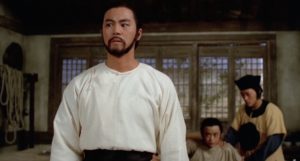 Tong begins and ends his journey as Master of None. As the case with Wang Yang, Tong reveals who he is very early on. For him, the family is everything, and yet, his actions undermine Tong’s desire.

Wang is Master of All. No boasting, he truly practices what he preaches. He emerges from being framed and manipulated even stronger than before. His students are his family. Wang does right by them, himself and his master. Wang Yang’s actions define him.

Ti Lung portrayed both of these men in divergent ways. Wang may not have been the most emotional man. His center balanced due to his training and confidence in doing the right thing. That said, he thinks of others, as much if not more, than himself. Everyone respects Wang, even his enemies.

Tong tries to put others above himself, but you see how he constantly fails. He cannot control the troops he is assigned to whip into shape, nor can he reign in his son. He tries diplomacy and yielding to a sadistic authority, but ultimately only takes action when it is too late. A man of many emotions and one who is fond of drinking, it is easy to see how this master could not control anyone or anything in his immediate space. It is no wonder Xiao Feng does not respect his father, and Tong’s pupils fall back into their old habits. 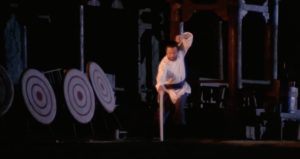 While Tong and Wang may seem very similar on the surface, as you can see, they’re quite different. The action-packed martial scenes in The Kung Fu Instructor only heightens how noble and just the title character is, while the endlessly tragic aura and lack of action push Tong into the role of The Master Strikes Back. This broken warrior riles against almost everyone including himself.  As Sun Chung parlayed the just and unjust throughout his Shaw Brothers filmography, in Wang and Tong, he showed us how lawful men fare in lawless situations. Selflessness and believing in yourself, no matter how hard the circumstance, will always win the day. It’s too bad Tong realized this after he lost everything.

Watch The Master Strikes Back with Prime Video

When not flexing her Pen Fu for ShawBrothersUniverse.com, Kim August contributed a story based on Chang Cheh’s Vengeance! to NANG magazine #3, and frequently ruminates on Shaw Brothers movies at her blog.