Posted at 04:46h in News by Kim August
Share 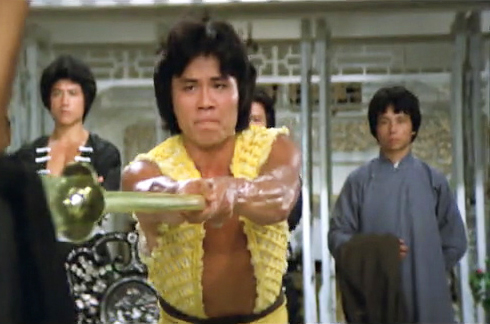 All work and no play makes Golden Sword a dull boy.

Master of the Kwon Do, in particular, the 49 moves of the Golden Sword House. Golden Sword style is a “hard sword” martial art employing big moves (sweeps and slashes.) Some of these lethal maneuvers include Golden Wheel Facing the Sun, Clouds from the Nine Heavens, Clouds Beneath the Feet, Rotations of the Sun Wheel and the Sun Shines Everywhere. Yuan is also quite adept at using his fan to block and confuse opponents.

In The Magnificent Ruffians, Yuan Ying Fei, the Golden Sword, oversees the many businesses passed down to him by his late heroic father. While Yuan effortlessly keeps various shops in check, his heart is empty. Business is the last thing on his mind. Yuan is a warrior who must prove himself. With the need for martial artists dwindling in modernizing China, Yuan’s martial prowess is no longer required. Finding peers of his equal to spar with becomes something of a challenge.

“Killing one or five… It makes no difference. They dared to come with such poor skills.”

As this realization dawns upon Yuan Ying Fei, his desire to employ his techniques with his namesake blade grows. This inability to earn fame eats away at Golden Sword, fostering a madness that has turned his competitive desires deadly.

Taking advantage of skilled martial artists unable to use their kung fu to earn a living, Yuan reels in his prey. First through free meals at his restaurant and then by feigning friendship in return to spar. With this plot, Yuan offers room and board to four wayward young fighters. All seems fine and dandy until an outside business run by the Guan family refuse to sell their property to Yuan. Soon the four martial guests of Golden Sword become friendly with the feisty Guan Yun. This friendship pushes Yuan’s sadistic manipulation of his new “friends” into dark places.

Many men have died by Golden Swords’ blade, yet Yuan keeps searching for opponents whose techniques match his deadly Kwon Do skills. Will his current guests including Yang Zhui Feng and He Fei, stand up to this fallen son?

When she is not watching, tweeting and writing about Shaw Brothers movies, Kim August is flexing her ‘pen fu’ as a member of  shaolinchamber36.com ‘s writing staff.