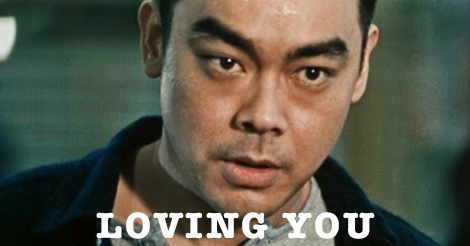 Posted at 00:55h in News by Celestial Pictures
Share

Johnnie To’s Loving You was released after his early successes — films like The Eighth Happiness, Justice, My Foot, The Heroic Trio — but before he established Milkyway Image and made the films he is ultimately known for and most associated with. Loving You feels like a film caught in transition; it’s part crime film and part marital drama, but neither focus develops in a totally satisfying manner. It is overall a nicely made film, but the feeling that it could have been more impactful never left me. It does feels unique and atypical of other Hong Kong films from around this time, though, leading me to believe that it represents a step by To in developing his personal style. Unlike most Hong Kong cinema fans, I’m in the odd position of only having seen To’s earlier films. I am left to speculate, but his reputation suggests to me that the quality and potential I saw in Loving You was indeed refined and perfected in later films under the Milkyway banner.

Lau Ching-Wan plays Insp. Lau Chun-Hoi, a workaholic cop whose marriage to Carman (Carman Lee Yeuk-Tung) is on shaky ground. The film opens with Lau leading a police raid on a major drug deal. Undercover cops are attempting a buy, with a team of back-up officers waiting just outside in support. The deal crumbles when the criminals discover a wire on an undercover officer, and before all is said and done multiple officers are injured and both undercover agents are dead. As you’d expect, Lau finds it hard to bounce back into his normal life after this event. His wife has something important to discuss with him, but he skips out on their plan to meet after work at her mother’s house. Instead he spends his night drinking, cheating and later sleeping in his car at a stoplight. He is a man who has lost all affection for life. He has become the void, and no matter what he fills himself with, it is never enough to satisfy that dark abyss.

Fate deals him an interesting hand, though. In a confrontation with the triad leader from the opening scene, Lau is shot in the head. The wound is non-fatal, but it damages his ability to talk, taste and smell. (Sidenote: the film’s Chinese title translates to something like Tasteless Detective.) Lau is forced to reconsider his connection to the world and those around him. He was a leader, but now he is made vulnerable and must depend completely on others to survive. His wife cares for him, though more out of a sense of morality than love. Within this struggle lies a lot of potential for meaningful, resonant drama but Loving You handles everything differently than expected. The film seems to reflect Lau’s nature as a character, a bit detached and unwilling to communicate its point clearly. In this way, the film is unpredictable, but it also left me without a sense of fulfillment. I trust Johnnie To as an artist, though, so I look forward to watching the film again and reckoning with his artistic construction. Knowing what I’m getting into will no doubt help, as well.

In terms of the film’s action side, it also feels transitional to me. I am a huge fan of the style of Hong Kong action produced up to the early ’90s, but the mid-’90s and later is always a bit hit or miss for me. Loving You feels like the middle ground, showing flashes of greatness, but overall exhibiting a more Western feel in terms of editing and pacing. To also uses lots of close-ups and shallow depth-of-field lenses, further removing the film from prior Hong Kong action greatness. Usually, all of this would be a film’s death knell in my eyes, but in the hands of To it somehow works. The action is never completely successful, but it works in context within the film. Unfortunately, after the film ends both the action and drama fade away because they don’t live up to their potential (both individually and together as a unit).

Loving You is definitely worth seeing, though, especially if you’re a fan of Johnnie To or Lau Ching-Wan. I’m also under the impression that the film was somewhat hard to find prior to its recent release to digital platforms by Celestial, so this alone should give Hong Kong cinema fans a cause for celebration.