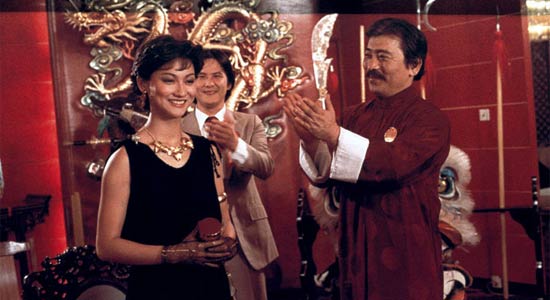 01 Dec LADY IS THE BOSS REVIEW BY BRENDAN DAVIS

Posted at 00:58h in News by Celestial Pictures
Share

Following the blueprint established by My Young Auntie, Director Lau Kar-Leung takes Kara Hui into similar territory with some twists along the way, in Lady is the Boss. This time out, instead of playing an extremely orthodox and traditional servant in the big city for her first time, Kara Hui plays Chan Mei Ling, the Americanized daughter of the Wah Chiang Martial Arts Academy’s master. Her father sends her to Hong Kong to help revitalize their school after it is forced to relocate by the government.

Kara Hui’s Chan Mei Ling surprised me initially. She reminded me of Charlie Yu from My Young Auntie, who served as her brash and impish foil in that film. Modern and impatient with formality, she swears at the slightest annoyance. When we first meet her, she has a guitar slung over her shoulder, a wad of gum in her mouth and a bit of attitude. This serves as a contrast to Lau Kar-Leung’s Sifu Wang Hsia Yuan. He’s been in charge of the school in the Master’s absence, and bristles at many of her proposed innovations.

Upon her arrival, Mei Ling is placed in charge of Wah Chiang Martial Arts Academy. At first the conflict of the movie is largely about how Mei Ling’s efforts to promote the school and embrace more modern approaches clash with Hsia Yuan’s traditional methods. He wants students to spend a year learning stances, while she wants to recruit young people at discos and tailor the curriculum to their personal goals. Soon however, they get embroiled in a conflict with the Old Sheng Society, after they train some of the organization’s bar girls in Kung Fu (which leads to problems at their establishment). When one of the bosses at Old Sheng beats up her new students, Mei Ling goes to settle the score and things soon spiral dangerously out of control. Along the way there are a lot of comedic moments and wild characters. But it ends with an energetic final showdown in a gymnasium where we get see Lau Kar-Leung showcase his stunning agility and precision in a sea of tremendous performers.

The martial arts and action of Lady is the Boss is quite good, though easy to overlook in the chaos and comedy of the plot. Lau Kar-Leung, Kara Hui and Gordon Liu are a reliable combination, and here that is no exception. There is even a dance fighting scene at the disco in a moment that harkens back to the ballroom masquerade in My Young Auntie. The choreography is quite varied. You see everything from a kickboxing match between 7-year olds to a knife fight and a brawl involving cameras swung by the strap like meteor hammers. The tone of the fights vary considerably as well, from light and comedic to sleazy and dark. There is one fight in particular that may leave some viewers a little uneasy. But overall, the movie leans on the lighter side of things, with no real threat of death hanging in the air.

The final fight is one of the craziest you’ll see on screen. This sequence has just about everything, from Mad Monkey Kung Fu to trampoline kicks. One of my favorite moments comes when Gordon Liu turns his character’s ridiculous exploration of fashion into an excuse for going full monk, in the style of 36th Chamber of Shaolin. In a flash, he goes from looking like Hunter S. Thompson on a bad day, to looking like the Gordon Liu we know and love. It is unexpected but seamlessly planned by his earlier antics. There is plenty more here to chew on as well, including a fabulous barbell attack, and a final showdown between Lau Kar-Leung and Johnny Wang.

I liked the comedy here, though again I think it isn’t as consistent as My Young Auntie. There are a few notable sequences that stand out but I most enjoyed the scene when Mei Ling and the other students exploit a terrible car accident to promote their school. We see limp and bloodied bodies being pulled from the wreckage as news crews arrive. The students leap in to be interviewed, saying they witnessed the entire accident and that the driver’s slow reflexes were to blame. If only the drivers had mastered kung fu, they assure the reporter, then the accident would have been averted. It foreshadows some of the humor to come in Stephen Chow’s hysterical Shaolin Soccer.

What is both captivating and odd about the film, at least for me, is the stream of eccentric costumes and characters. Lady is the Boss is an 80s film if there ever was one, and given that it was made in 1983, it is almost ahead of its time with the amount of notable 80s tropes it deploys. There is too much to cover in a simple review but it has outrageously dressed disco-goers, Gordon Liu in an outfit and sunglasses that will never leave your mind, BMX kung fu, hints of Flashdance, and enough eye-glitter to stage a GLOW tournament. It is odd, but compelling.

Much of Lady is the Boss mirrors what came before in My Young Auntie. In that film, Kara Hui arrives by boat and is met by Lau Kar-Leung at the docks, here he meets her at an airport. Both movies feature a final duel between Lau Kar-Leung and Johnny Wang, and both end with Kara Hui’s character being taken hostage. Many similarities like this occur throughout the movie.

One striking difference between My Young Auntie and Lady is the Boss, is its approach to film-making. My Young Auntie feels more like classic Shaw Brothers, with a heavy emphasis on sets, while Lady is the Boss isn’t as anchored to indoor environments. For other studios at the time, this approach worked very well, and the sets can definitely date production, but personally I still have a soft spot for the feel of the classic sets and the intimacy they create between the characters. Lady is the Boss has a more open and mundane feel as a result. It lends believability to the grittier scenes, but I think it would have paired better with My Young Auntie if they had stuck more to the classic sets.

While I enjoyed it, Lady is the Boss doesn’t hit the same heights as My Young Auntie and it might not be everyone’s cup of tea. The movie has some very nice moments and it is entertaining. It is also worth seeing for the final showdown alone as well as some of the scattered humor and 80s clichés. Kara Hui once again plays an excellent lead, and the action performances overall are strong. If you liked My Young Auntie, you’ll definitely want to see this one. If you haven’t seen My Young Auntie, I recommend watching that one first.

Watch The Lady is Boss with Prime Video