Posted at 04:00h in News by Celestial Pictures
Share

“Killers are like shooting stars. They appear in brilliance and vanish in no time. And besides that, they’ve no name.”

The opening of Killer Clans takes two mysterious killers and pits them in a brief duel on a dark shadowy bridge. One is a hired assassin and the other is a killer with a record of destruction a mile long to his name. It’s a list of death that’s touted by his challenger in degrading manner, as if to say that no matter how many lives he has taken he is still the inferior fighter in this match. However, the fight is hardly as epic as it is quickly built up to be. In fact, it’s over in a flash and the film pauses to deliver the above quote as a narrative voice over. Death came so fast for one of these two killers, that his glory is most certainly akin to that of a shooting star burning out before anyone has much of a chance to behold his feats.

It’s a strange and off kilter way for Chor Yuen to start off his wuxia epic Killer Clans. Even more off putting is the fact that from there, the film immediately dives into a layered and robust martial arts world where our hero, the hired killer from the opening sequence played by Chung Wah, must navigate a very dense and complicated feud between two clans to assassinate the target he was assigned to kill. This is not unusual for a Chor Yuen film though. Based on an epic Ku Long wuxia novel, Killer Clans follows a formula that Chor Yuen would use repeatedly for films of this ilk as it vomits out numerous characters and plotting very quickly in the opening act to set the stage for the film on hand. He spends the rest of the film putting the pieces together with the audience. At times it’s a challenging approach, but when it works it certainly works effectively. 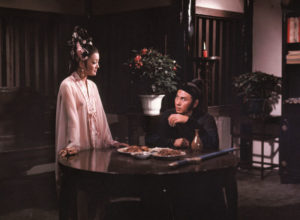 As Killer Clans plays out, it becomes increasingly effective at using this initial confusion by its audience to develop its conspiracy plot. The focus shifts from our assassin hero to the complex conspiracy on hand and he acts as a threading for the audience to weave into the chess match of loyalty and betrayal that the film presents itself as. The first half of Killer Clans is littered with seemingly unnecessary secondary narratives, a blooming romance between our hero and a strange hermit woman in the Butterfly Forest is one of them, but there seems to be a lot thrown down for the viewer. Bodyguards with mysterious pasts and familial dynamics ultimately come into play too. As it goes though they all begin to tie into one another, unraveling a tangle of plots into one big narrative knot that Chor Yuen navigates with nimble finesse. It’s like watching an entire universe unfurl as the detail becomes relevant and then the way it’s all connected begins to make sense. By the third act, most of the audience’s questions or concerns have been answered and while the darker elements of its plot reveal that everything may not be all right in the world, the story itself makes sense and the magic of its narrative display wraps up in a satisfying manner.

Killer Clans is also powered by its seemingly philosophical approach as things start to become clearer in the manner it plays out. The Uncle of the Lung Men Clan, played with screen stealing enigma by legendary Shaw actor Ku Feng, at one point remarks that secrets and loyalty are the only things that exist in the power struggles of the martial world. That only enemies can be trusted because one knows exactly where they stand. This theme of distrust and betrayal repeatedly whips out hits vicious head again and again as the film plays out and it gives Killer Clans a shockingly dark undertone for the fun wuxia surface elements. It gives the film depth that even on initial viewings is not so obvious. The nature of the film is to be initially overwhelming and that sense of distrust for the audience permeates into the thematic pieces of the film and our hero, as a pawn in a larger game, is about as confused as we are. This isn’t a feel-good wuxia where the good and evil battle and ultimately good triumphs. This is a wuxia where the good and evil are as morally gray as one another that all the edges are all blurred. 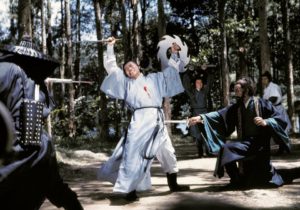 This density of writing, bombardment of characters, and tangled plot lines is one part of what Killer Clans offers as a film. To balance it all out, Chor Yuen offers another part and that’s a highly entertaining and brightly colored film on the surface. The action sequences, which are usually want fans seem to have the most trouble with, are still rightly entertaining with plenty of lofty gimmicks, including a rope tying trap, hidden darts/blades, and plenty of sword fighting to satiate that craving. Lo Lieh pops up to steal a few scenes as a vicious bodyguard with a bladed hat and a penchant for wiping the blood of his kill over his face. The film is also remarkably well balanced with great production design. Whether it’s the complex sets or real settings, the film balances a lot of unique environments to give each moment its own tone and feel. Perhaps the hidden ace in the sleeve though is the use of distinguishing costumes and character traits to help the audience sift through the various characters with better effect when it is throwing out dozens of them. Lavish outfits fit into the dynamics of the plotting and continually match the reveals and hidden agendas of the various shifts in loyalty that play into the films tone and plot. There are even moments where the costumes come into play as relevant plot hints and progressions to help give the film a cohesive feel as a whole and help the audience along.

Chor Yuen may have refined some of his style and approach to these epic wuxia films later on and the opening act of Killer Clans can still be a bit uneven as it unloads all of its set up, but it’s hard not to enjoy this film for its ambitious nature and layered approach to theme and detail including its sets and costumes. It’s an ultimately flawed film in its execution, needing perhaps a more striking presence in the lead role to balance out some of its fantastic secondary roles, but for fans of the genre it’s one that’s memorable for its darker tones and often intricately woven narrative. In the grander scheme of wuxia, Killer Clans might be that shooting star that burns so brightly…even if it’s just for that wondrous moment.