12 May Justice, My Foot! Movie Review by Will Kouf

Posted at 22:52h in News by Celestial Pictures
Share

Stephen Chow was at the top of his game in 1992. He starred in eight films that year and seven of them made the Top 15 of that year’s Hong Kong box office. That’s an amazing feat, without a doubt, but even more amazing is that he starred in every film in the Top 5! Among these smash hits, Justice, My Foot! stood atop them as the number one grossing film of the year. I’m definitely not the person to assess exactly why Justice, My Foot! rose above the others, but I imagine it has something to do with the rapid-fire script that lampoons Chinese law, Chow’s trademark Cantonese wordplay, and the team-up of Chow with the incredible and sorely missed Anita Mui. I prefer both King of Beggars and the Royal Tramp films to this one, but Justice, My Foot! is still a great piece of comedic filmmaking whether you get every joke or not. 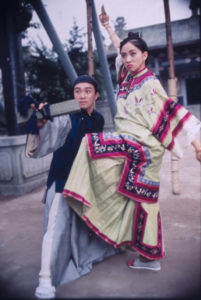 Sung Sai Kit (Stephen Chow) is a lawyer with a shaky moral compass who will stop at nothing to win his cases. He’s devilishly clever and quick to manipulate the participants to his will, routinely getting guilty people out of their due punishment. His wife (Anita Mui) has put up with Sung’s behavior for quite some time, but when their 13th child dies before hitting a year old, she decides that enough is enough. She makes him swear to switch careers and be a good man, or else the son she’s currently pregnant with will be born without a penis. Sung begrudgingly agrees, but he has a very hard time leaving his chosen profession by the wayside (much to the audience’s delight).

Further elevating the film and its comedy, Sung’s wife is exceptionally adept at the martial arts, to the degree that she is able to perform wild feats of wuxia-level skill. Justice, My Foot! is definitely not an action film, but it is occasionally spiced with great martial moments featuring Anita Mui and Eddy Ko Hung, choreographed by the multi-talented Ching Siu-Tung. The film’s action looks and feels different than what you usually see in early ’90s Hong Kong films, in part because the action elements merely punctuate and enrich the experience; they are not the focal point in any way. Ching Siu-Tung still manages to incorporate a few of his trademark spinning bodies wearing flowing robes, though. 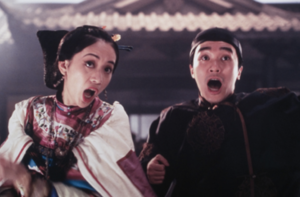 Costume Designer Bruce Yu was nominated for a Hong Kong Film Award for his work on Justice, My Foot!, and it doesn’t take much investigation to understand why. Justice, My Foot! is filled with a wide range of colorful costume work, most notably the many qipao worn by Anita Mui (and the other female players). Every one is exquisitely detailed down to the last stitch, but a few of the men’s fashions are almost as impressive. Stephen Chow wears some wonderfully embroidered shirts, and his frequent co-star Ng Man-Tat sports a beautiful rendition of the traditional clothes of a local magistrate. It’s overall a gorgeous production, with even background players outfitted in stylish, detailed costumes.

Justice, My Foot! was directed with a sure hand and a wonderful sense of timing by the well-loved filmmaker Johnnie To. Westerners may find the plot and dialogue a tad hard to keep up with at times, so I’d probably suggest another of his films over this one to a first-time Chow viewer. Regardless, the film is delightfully crafted and fans of Stephen Chow or Anita Mui will definitely enjoy it (and I imagine much more so if you speak Cantonese!).