21 Aug IN CHANG CHEH WE TRUST: SUMMER OF THE SWORD STAINED WITH ROYAL BLOOD

Posted at 23:24h in News by Celestial Pictures
Share

There are a couple moments in Sword Stained with Royal Blood where it’s hard to accept where the film is going, including most of the first act. However, in the case of a film like this, there are three things to remember before one starts watching: 1) The film is based on an epic wuxia novel of the same name that’s popular enough to be made a handful of times in cinematic form. 2) It’s also a movie that contains the sheer entertaining capabilities of Venom Mob members anchored around a leading role for Phillip Kwok. And 3) it’s Chang Cheh sitting in the director’s chair. If there is any lesson that one can learn from watching dozens upon dozens of Shaw Brothers films, it is that you always trust in Chang Cheh. I’m tempted to even have ‘In Chang Cheh We Trust’ tattooed on my arm at some point.

The lesson though, especially with the epic tone and robust narrative of a wuxia like Sword Stained with Royal Blood, is that it’s best to buckle yourself down and go for the ride. When it’s a story that is as massive as the original tale that this film is attempting to adapt, one must trust in the execution on hand to get them through the bumps and the gaps to something entertaining at least. For this film, it’s that intent of crafting a heartfelt attempt of entertainment that truly make it worth seeing. Chang Cheh is masterful at crafting art out of entertainment and this film is no exception.

The first act of Sword Stained with Royal Blood is a bit of leap. It sets things up more like a Chor Yuen wuxia than a Chang Cheh one as it introduces us to a political context about rebellions and slaughtered heroes, where a young man is taken to be raised by a martial arts master in the mountains. This young man naturally grows up to be Phillip Kwok, well a hero named Yuan and played in the most Phillip Kwok ways with innate charm and ridiculous athletic abilities. He’s a hero and his intent is unquestionable. Fortunately, because it’s Phillip Kwok, we never truly doubt his good-natured intentions and everything he does, no matter how strange or rushed it is in the plot throughout the rest of the film, is carried by his charisma. In perhaps the most off center sequence of the film, Yuan, along with his trusty mute caretaker who just kind of pops in and out of the narrative for the first and eventually the third act, uncover a hidden cave. In the most wuxia manner possible, our hero navigates the traps, shows he’s an honorable man by following instructions written on old scraps of paper, and takes a dead corpse as his new teacher to learn from a manual an entirely new kind of martial art. That’s wuxia for you. 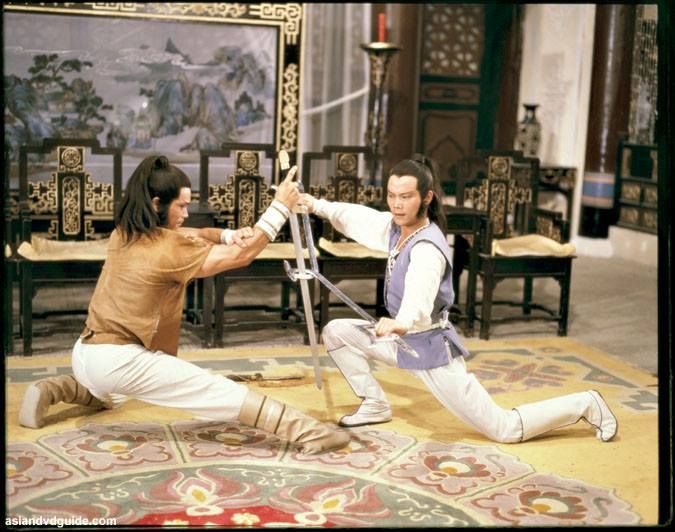 Truthfully, there is enough that happens in this first act to fill an entire film as it races through a handful of characters and plot points and, at times, Sword Stained with Royal Blood seems to be more of an origin story for a wuxia hero than anything else. Don’t worry though, once our hero heads off on his own in search of a mysterious woman mentioned in one of his corpse teacher’s notes, the film starts to settle into a classic and more restrained narrative. It’s a weird start, but as I said, trust in Chang Cheh.

The rest of the film is a much easier to consume and massively entertaining film. Sword Stained with Royal Blood proceeds to introduce us to competitive martial arts schools, a woman pretending to be a man (although it’s obvious that she isn’t a man and the audience is only clued into her being disguised as a gentleman by how other characters react and refer to her) that becomes the core romantic subplot of the film, and tons of backstabbing and loyalty questioning. Under the guidance of Chang Cheh and featuring the phenomenally speedy and intricate choreography by a handful of Venom Mob members (a few of the classic ones show up in smaller roles throughout the second and third acts), Sword Stained with Royal Blood goes from a bumpy ride into full Shaw Brothers-instant-classic speed by the third act. The film falls into a more natural narrative scheme, only mildly knocked off momentum by a lofty flashback sequence at the beginning of the third act that answers a ton of questions for the audience and introduces a nice romantic parallel for other characters in the narrative, and it drives down on showcasing the impressive talents of its cast with its martial arts sequences. See what happens when you trust in Chang Cheh?

For martial arts fans, the intricate wuxia story being told partnered with the impressive fight work from the extensive set of secondary characters and the always reliable Phillip Kwok make Sword Stained with Royal Blood a classic. It’s often a bit silly, aware of the charm of its characters and casting, and never shies away from delivering on the entertainment of its premise with a heavy hand in all regards: action, romance, drama, and thematic elements. This means that the film can be seen as cheesy, which isn’t wrong, but it’s also part of what makes it so great as it embraces it all.

In the end, win, lose, or draw, it pays to trust in Chang Cheh. Even if the movie seems less than perfect.