05 Sep HOUSE OF TRAPS’ Five Rats (aka The Righteous Five)

Posted at 13:36h in News by Kim August
Share

“…Heroes are involved and many want fame. Unlike us…” 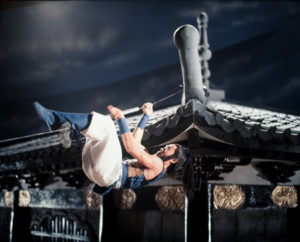 Sky Rat: True to his name, the Sky Rat scales ledges and conquers heights, yet the eldest of the five blood brothers is equally comfortable on the ground. His unique ‘hand’ shaped claw weapon lends a grappling and slashing maneuver to Sky Rat’s relentless fight style. His agility is particularly advanced and allows him to confuse and push back foes. First Brother’s fight techniques are adaptable to his opponents; anything they do, Sky Rat does better. His anger over the loss of the Brocade Rat pushes the quartet into action.

Ground Rat: No tunnel or patch of earth gets in Ground Rat’s way. His digging shovel doubles as a weapon. Second Brother is strong enough to break through walls and floors. 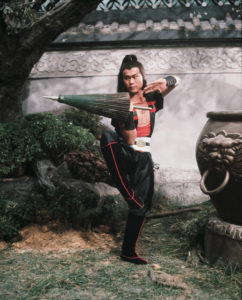 Mountain Rat: Third Brother is a master of lightness technique. His ability to defy gravity and perform a variety of acrobatic feats with his umbrella drill are captivating and deadly. He has something of the same impetuous streak as the Brocade Rat.

River Rat: The Fourth Brother is as much the acrobat as his elder Mountain Rat, yet the River Rat’s nimbleness reveals an even finer command of lightness technique than his friend. None-the-less, these two perform and battle as one. His jolly demeanor and willingness to do right are admirable traits.

Long desired for their air and land styles of kung fu, the blood brothers remained loyal only to themselves until the Brocade Rat’s wanderlust into the title house results in his demise. The remaining rats are determined to avenge their fallen blood brother; posing as workers or acrobats, the surviving rats infiltrate Prince Zhao’s residence shortly before his Highnesses’ birthday. Discovered by the Black Fox (Kuo Chue) and Zhang Yuan (Lung Hsiang-Tien), the remaining blood brothers and heroes band together to expose and defeat the royal turncoat. Will these righteous rats find peace in their heroic deeds?