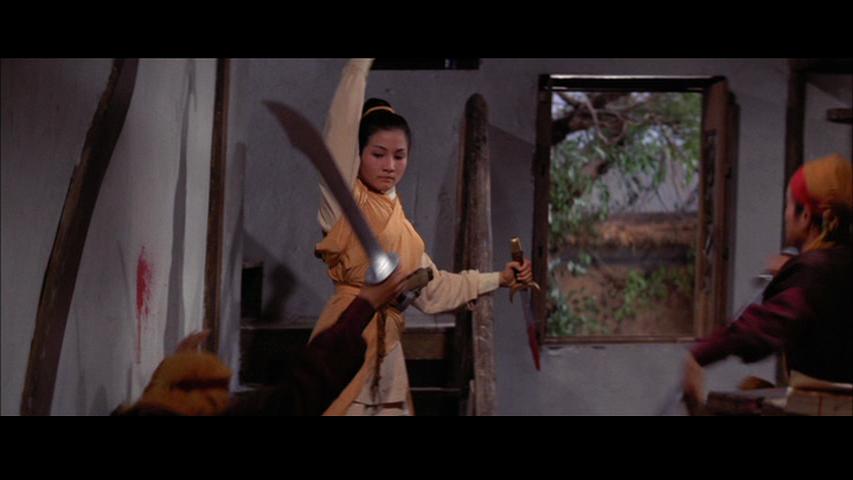 Posted at 17:44h in News by Celestial Pictures
Share

Chang Cheh’s Golden Swallow is a sequel to King Hu’s Come Drink With Me, but it is most certainly not more of the same. It is a film defined by Chang’s artistic drive more than anything else. In Chang’s memoir he called the The One-Armed Swordsman “a hackneyed work except for the breakthrough achieved in pace and motion,” so he attempted to rectify this by focusing on the artistic elements in his next film: The Assassin. He found the results to be too pretentious for his taste, but with these lessons learned he soldiered into production of Golden Swallow. Chang was far more pleased with this work, calling the film his “first personal favorite” and even “the peak of the wuxia genre.” This satisfaction left Chang tired of the wuxia style, and his search for something new and exciting would eventually lead him to make the Republic-era film Vengeance! in 1970.

The story’s drive is the romantic triangle between Golden Whip (Lo Lieh), Golden Swallow (Cheng Pei-Pei) and Silver Roc (Jimmy Wang Yu). The film begins when Golden Swallow is poisoned by some bandits. She is quickly rescued by Golden Whip, who takes her into his home, nurses her back to health and even teaches her a few new sword tricks. They develop a natural affection for one another during this time, but the force of chaos that is Silver Roc drives a wedge between them. Silver Roc has loved Golden Swallow for many years, but thanks to his selfish pride he refuses to just go talk to her. Instead, he decides to kill bandits throughout the land and leave Golden Swallow’s darts to incriminate her, hoping she will learn of this “imposter” and investigate her way back to Silver Roc.

Silver Roc is the film’s most interesting character. He’s young, brash, and prideful, but he also has the skills to back up his trash talk. A normal person wouldn’t even consider a plan of killing bandits to make a girl say hi, but in the eyes of Silver Roc it is the only possibility. This speaks to his exceptional combat knowledge and abilities, but also to his confidence in his martial talents. His fight performances add further fuel to this fire, as he routinely kills multiple men with a single, easy stroke of his sword. In Silver Roc’s eyes, though, his abilities and his dominance in the martial world are nothing without Golden Swallow’s attention. Many stories have related the idea that it’s lonely at the top, but few films do it with as much style and exuberance as Golden Swallow. The character also serves as a reminder to us all that we must not lose sight of the broader picture while focusing on the fine details in our lives.

A common complaint on this film is that the character of Golden Swallow is pushed aside in her own film. It’s true that she’s not at the forefront of the film as she is in Come Drink With Me, but she is far from a supporting character in the story. She shares equal screen-time with her two male co-stars, and the film’s point of view is split between Golden Swallow’s and Silver Roc’s. In addition to that, literally the entire film revolves around her. She isn’t always an active player in all the proceedings, but this is part of the film’s point. Silver Roc’s obsession over Golden Swallow is one that only considers half of the story. She participates in her side of the story, but nothing she actually does influences or matters to Silver Roc. He acts on his own for some ideal version of their relationship that never existed. It might have existed had Silver Roc swallowed some of his pride, but therein lies his flaw. The dual narrative does an excellent job communicating these ripe emotions to the audience, and it’s what defines Golden Swallow as a unique and exceptional wuxia film.

Golden Swallow is a sequel to Come Drink With Me, but King Hu and Chang Cheh approach their material in divergent ways. It is not so much a follow-up as it is a film sharing a character that explores entirely different emotions and subjects. It deserves to be seen as its own piece, because it’s too great to be lost in the shadow of Come Drink With Me. Golden Swallow was integral to the growth of Chang Cheh as a director, and is an essential Shaw Brothers wuxia.

Written by Will Kouf. Go follow him on Twitter and make sure to check out his site Silver Emulsion Film Reviews.