31 Aug Crippled Avengers: Graceful And Acrobatic Action With A Twist

Posted at 15:47h in News by Brendan Davis
Share

Chang Cheh made so many excellent movies it is almost ridiculous. From the One-Armed Swordsman to the Five Element Ninjas, he delivered movies that demand repeat viewing. With his intense focus on martial arts and “staunch masculinity”, Chang Cheh films are poetic depictions of violence. Crippled Avengers is no exception in this respect, but exceptional in its own right. From its brutal beginning to its final frame, Crippled Avengers is a feast of graceful and acrobatic action that tells a tale of revenge with a twist.

Crippled Avengers stars the venom mob, actors that Chang Cheh worked with on a number of films. It has sometimes been marketed in the United States as Return of the 5 Deadly Venoms, but it isn’t a sequel, it merely stars most of the same actors from the movie The Five Deadly Venoms. The Venom Mob in Crippled Avengers have excellent chemistry and bring a high level of physical skill to their performances. The venoms also had backgrounds in Peking Opera and action choreography, which are put to good use here. Both Lu Feng and Chiang Sheng were, in fact, action directors for Crippled Avengers in addition to acting in the film.

The film has echoes of the Five Venoms (and this is a Venom Mob film) but also of the One-Armed Swordsman. Crippled Avengers brings us protagonists who endure loss of sight, limb and even mind, to become heroes. This is an old story but it resonates for a reason, and it is a theme that Cheng Cheh returns to often. Maimed heroes endure because they embody perseverance and the ability to adapt to changing conditions. As characters, their endurance through hardship elicits our sympathy but also gains our respect. They are the opposite of the arrogant villains they face in the film. 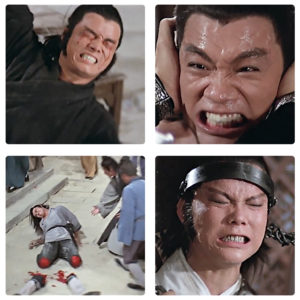 Our heroes as they are maimed.

The heroes are each maimed by the villain, Dao Tian-Du (Chen Kuan-Tai) and his son, Dao Chang (Lu Feng). One by one, we witness each of them lose something to the devastating pair, who seem to have the local community completely under their bullying thumbs. Chen Shuen (Philip Kwok) is blinded when they gauge his eyes. Wei (Lo Meng), the blacksmith, looses both his voice and his hearing through a clever use of poison and potent ear smashing technique. Mr. Wang (Chiang Sheng) has his intellect taken when they crush his skull with a kind of vice, transforming him into a child-like buffoon. Ah-Kue (Sun Chien) has his legs cut off for the simple offense of bumping into the villain’s iron-handed son. In each instance, the villains cripple them over relatively minor slights or accidents.

After bonding through their hardships, the heroes go to Eagle Mansion where they learn from Mr. Wang’s master and we witness each adapt to his condition so they can get revenge. The blind hero, Chen Shuen, is taught to use his hearing. Wei the blacksmith, learns to communicate by having people trace their fingers on his palm. He also adapts to his deafness by using mirrors to spot approaching enemies. Ah-Kue replaces his lost legs with feet of iron and learns to kick with deadly potency. The training sequence is one of the better ones I’ve seen and important for helping establish the different characters.

Their badass moves make all the difference in this movie.

One thing that stands out in Crippled Avengers is the stellar action sequences. Not just swordplay and Kung Fu, but some truly acrobatic performances. Between punches there are leaping somersaults and reverse flips, and nimble antics with metal rings. I particularly enjoyed the fast iron-heeled kicks of Ah-Kue (Sun Chien) and the acrobatics of Wang (Chiang Sheng) and Chen Shuen (Philip Kwok).

There is also a nice variety of weapons. The fights mix swords, staffs, meteor hammers, iron claws and more. We get some interesting pairings out of this and we also get plenty of open-handed Kung Fu. The venom mob doesn’t disappoint, with impressive performances that astound the viewer at times

Acting performances are quite enjoyable. Again, there is plenty of chemistry here and the resulting camaraderie helps draw the viewer into the film. Philip Kwok, as Chen Shuen, makes for a convincing leader of the group. Fan favorite, Lo Meng is particularly good as the deaf and mute blacksmith. Despite a lack of dialogue he still manages to bring his usual power and charisma to the screen. Chiang Sheng as Wang offers ample comic relief but is also one of the most sympathetic and moving characters in key moments.

The two fearsome villains, Chen Kuan-tai and Lu Feng, are a father/son duo who count Wang Lung Wei amongst their henchmen.

Crippled Avengers offers two fearsome villains, a father and son team who engineer their own downfall by leaving a trail of crippled victims wherever they go. The mother of the family is brutally maimed and killed and the son has his arms cut off by the attackers. The father vows to train his son in martial arts and to build him a pair of powerful iron arms. This sends both of them on their evil course. It is a very interesting backstory and there is a lot of inventiveness with the iron arms as weapons (they shoot darts and can extend, for example).

Brendan Davis is a writer, game designer and wuxia film enthusiast. You can read many of his reviews at the Bedrock Blog or watch his videos on YouTube. He recently released a wuxia tabletop RPG called Wandering Heroes of Ogre Gate.