05 May Celebrating the Birthday of the Deadliest Venom, Weapons Master Lu Feng By Kim August

Posted at 21:52h in News by Kim August
Share

Happy Birthday to the one and only Lu Feng!

A member of the Taiwanese National Opera School as of eight years old, Lu found his specialty in pole and blade weapons when his singing voice outgrew the needs of the opera. Their loss is our gain, as Lu’s spectacular displays of skill, control and power continue to delight Shaw Brothers fans four decades on. Currently, the deadliest member of the Venoms Mob works as a director for Hong Kong television.

The insidious nature of Lu’s evil men remains hidden behind the guise of wealth and power. His cultured villains are anything but gentlemen. When his characters reveal their true selves, Lu Feng’s mastery of bladed weapons often results in multiple opponents struggling to defeat him. When allowed the rare chance to play the gallant hero, his martial talents are equally evident. Even better is his subtle acting, which propels his performances into scene-stealing glory. The two-pronged nature of Lu Feng’s skills lends his nefarious or just men an air of reality to an otherwise fantastic tale.

On his birthday today, I offer notations on several rogues from Lu’s work as a crucial member of the legendary Venoms Mob.

Lu Feng’s speed, agility, and jaw-dropping display with the Guan Dao did not go unnoticed by Hong Kong’s awards community, earning Lu the Best Supporting Actor award in 1979 for his relentless martial performance in Shaolin Rescuers. Lu would reprise the character in the excellent Two Champions of Shaolin. In the latter film, he has plenty of room to flesh out Gao’s character once he does appear (a little over an hour in.) This secret agent employs his elegant manners to slip into the good graces of Shaolin rebels, before killing them. Lu’s acting in his introductory scene with Lo Meng blew me away on first viewing, and that exceptionally subtle turn commands the viewer to focus only on him. Trading the Guan Dao for a nasty trident and needles, Gao reveals his kung fu gradually. Stealth mode gives way to zealous fervor.

Another wealthy member of society who is not what he seems. Lord Ling is Chief number One of the title ruthless gang. These bandits have a depraved penchant for debauched living and trident welding kung fu. The Masked Avengers kill for profit and control. Ling’s fiendishly smug superiority never waivers: even as his former peer reveals the wealthy man’s true persona. Lu exudes power and charisma here, and his end fight entrance is a blast. 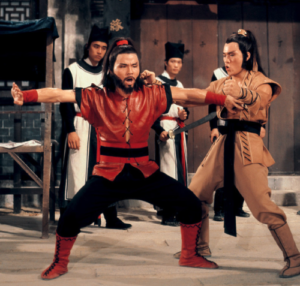 The joys of watching Centipede (Thousand Hands) do his thing are many. From his unrelentingly fast fist and footwork to being a bit too skilled with nasty piercing weapons, Centipede’s greed overrides all else. For the multi-dimensional characters Lu portrayed after this film, it’s wonderful to see what he does with such a comic book style villain. Whether listening to Centipede scheme or watching him unleash that blisteringly fast technique, he’s a villain you simply cannot hate. Five Venoms also boasted Lu’s first turn as a choreographer. 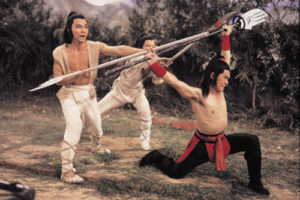 While Lu’s nefarious bad guys remain his most beloved characters; Chang Cheh cast him in hero roles too (all four Brave Archer films, The Daredevils, Ten Tigers of Kwantung and his noble gallant Hu in Legend of the Fox.) While Lu, Sun Chien, and Chiang Sheng’s roles are in minor in this particular movie, the Brave Archer 3 final fight boasts one of the greatest pole weapon performances Lu unleashed during his Shaw Brothers career. Going stroke for stroke against Chu Ko and Ricky Cheng Tien-Chi, Lu’s mastery of the long axe shines in this frantic battle. If you watch closely you can observe how much control he has when fighting his opera brothers, always avoiding a hard strike. Though Lu’s descent onto his forearm after killing one opponent still makes me wince despite the many times I’ve watched this melee. 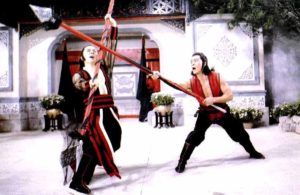 In this reimagining of Chang Cheh’s The Duel (1971), Lu plays the crafty major domo Cao Feng who hires an assassin to kill his master so he can become the new chief. Lu gets a very meaty acting role in Cao, and the end fight is an ingenious wink to the operatic Venoms training. The flag work Lu and Kuo Chue unleash builds upon traditional opera moves before the title weapons are used as spears (the tips are spearheads, a common weapon throughout the film.) 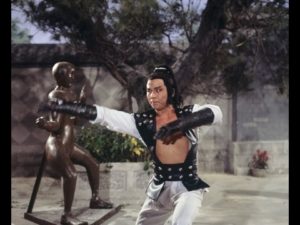 Like father, like son. While Papa Dao (Chen Kuan Tai) is psychologically shattered from the attack on his family, his stoic son (Lu) uses the iron gauntlets that replaced his arms as a deadlier extension of his father’s lethal Black Tiger style. Lu’s use of both metal arms in Crippled Avengers expands upon his experience fighting with one iron gauntlet in Life Gamble. As Lu and fellow Venom Chiang Sheng served as action directors (with Robert Tai-Hsien); their design of Dao family fight style focuses primarily on fist sets to allow Lu and Chen Kuan Tai space to unleash their shapes. It is great fun seeing Lu deploy the Black Tiger forms with iron arms. From an acting perspective, Lu’s turn as Dao Chang includes a powerful moment when he overhears dad’s warped philosophy while eating alone. Chang’s solemn expression speaks volumes. How sad Lord Dao would not eat with his son.