Posted at 18:59h in News by Kim August
Share

“Taoist magic is the foundation of this formation. Of course I learned that in my childhood.”

Both are in their late teens. 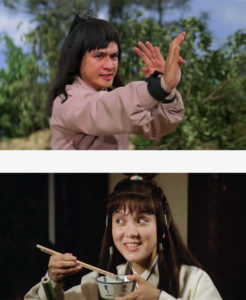 Kuo Tsing studied the Eighteen Dragon Subduing Palms as passed down to him by Hung, the Nine Fingered Master of the Beggar Clan. He had previous martial training from the group of kung fu masters known as the Weird Seven.

Huang Rong-Er’s kung fu revolves around Taoist magic and numbers passed onto Rong-Er by her father, Huang Yau Shi. She also learns valuable weapon training from Beggar Hung. His staff techniques enable her to claim leadership of the Beggar Clan. Huang possesses a wit and intellect well beyond her years; No riddles, numerology or convoluted phrases can thwart her. Her kindness and cooking skills offered to the Nine Fingered Beggar Hung resulted in the Beggar Master teaching Rong-Er his staff techniques, and Tsing the palm skills.

Kuo and Huang have been through many trials since their meeting at a restaurant near Yong Ding Gate. When the couple retrieves a valued manual from General Yue’s tomb within Mount Iron Palm, Rong-Er suffers an almost fatal internal injury from Qiu Qian Ren’s deadly Iron Palm punch. 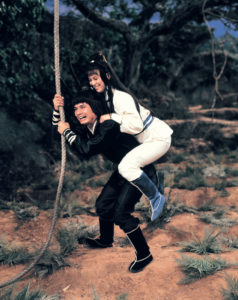 While Kuo buys them time, the duo escapes, fleeing into the wilderness where they meet the bitter Auntie Ying. The duo’s tests will not cease, even though the young lady’s grievous injuries born from Qiu’s Iron Palm may kill her. After their experience in engaging and defeating Auntie Ying through Rong-Er’s Taoist wisdom, they agree to deliver Ying’s package to the man who can heal Rong-Er: Emperor Duan himself.