10 Oct BRAVE ARCHER 3: THE EPIC CONCLUSION (OF SORTS) OF A WUXIA CLASSIC

Posted at 22:01h in News by Brendan Davis
Share 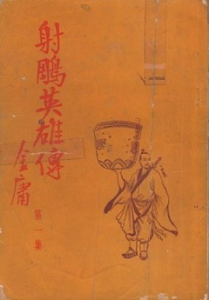 The Legend of Condor Heroes, first in a trilogy by Jin Yong.

In Brave Archer 3, context is incredibly important. A common criticism of movies like Cheh’s Brave Archer series or Chor Yuen’s Killer Clans (or any martial arts movie based on a novel or classic) is that the plots are wildly complex or confusing, with too many characters. But they are based on source material that the audience was often familiar with and presented against historical events the audience knew well. With Brave Archer 3, understanding the context of the movie can greatly enhance one’s appreciation of it.

The context of Brave Archer 3 is multifaceted. First, and most obvious, it is the third movie in a series of films. It is also technically not the final film in the series*. Second, it is based on a well-known wuxia novel called Legend of Condor Heroes. Third, the film is set in historical China during crucial events that help give the plot much of its emotional weight. 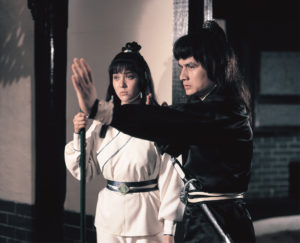 Needless to say, if you are watching Brave Archer 3, you should watch the first two films. But just to give a quick recap of the first two installments. Brave Archer 1 tells the story of a heroic couple, Guo Jing and Huang Rong, who meet and fall in love. Guo Jing is the main protagonist and his story is contrasted with the life of his sworn brother, Yang Kang. Both are the sons of martyred Song heroes and each are raised by foreign or invading cultures. However, Guo Jing embraces his legacy and the righteous path, despite the difficulty it presents to his life, while Yang Kang rejects it for riches and power. Brave Archer 1 climaxes at a competition on Peach Blossom Island where Guo Jing must compete against the nephew of the villainous Ouyang Feng for the right to marry Huang Rong. In Brave Archer 2 Guo Jing and Huang Rong contend with the continued schemes of Ouyang Feng, fighting over possession of the Nine Yin Manual. In the fray, the master of Beggars’ Sect is wounded and passes his authority to Rong, making her the 19th Beggar Chief. The film culminates in a great battle over control of the organization. In terms of film sequence, this is the context in which the third movie appears.

The third movie picks up right where Brave Archer 2 leaves off, after Huang Rong has been made the 19th Chief of Beggars’ Sect. The basic arc of the movie is their conflict with Iron Palm Sect after Guo Jing and Huang Rong take the Book of Wumu from Iron Palm Peak. This is a military treatise written by General Yue Fei (a famous Song Dynasty patriot).

Zhou Botong and Liu Ying caught having an affair.

The chief of Iron Palm Sect, Qui Qianren (played by Lo Meng), goes after them and wounds Rong with his palm strike. Many of the elements from the first film come together here as their quest to heal Rong takes them to Duan Zhixing, the Southern Emperor, one of the five greats. Played by Ti Lung, Duan Zhixing was once the ruler of Dali but has become a monk. One of Zhixing’s concubines, Liu Ying, had an affair with Zhou Botong, an eccentric character who first makes an appearance as a prisoner of Peach Blossom Island in Brave Archer 1. Botong ran off following the affair and Liu Ying had a child soon after. One night, Qui Qianren attacked the child with the same palm technique used on Rong, as part a tactic to get Duan Zhixing to deplete his energy for five years by healing the baby. When Liu Ying brings her child to Zhixing, he hesitates and refuses to heal him, fearing to fall into Qui Qianren’s trap. Liu Ying kills the child to end its misery and vows revenge against Duan Zhixing.

This backstory is slowly revealed when the heroes first meet Liu Ying, now a reclusive swamp-dwelling hermit. They arrive at her home while in flight from Iron Palm Sect. She tells them to go to Duan Zhixing, who can heal them, but warns they will have to face guardians protecting him along the way. Using mainly Rong’s wits, they get past the guardians and reach Duan Zhixing, who heals Rong. After she is healed, they realize that Liu Ying is employing the same tactic that Qui Qianren did so many years ago. They now have to protect Duan Zhixing from her impending attack, as well as contend with the Iron Palm Sect in a final climactic battle.

One thing Chang Cheh does brilliantly is give each movie a sense of completeness even though it is just one part of a much greater whole. We get a tremendous climax by the end of Brave Archer 3, but there is still more to the tale and those threads are picked up with Brave Archer and his Mate (which is about Return of Condor Heroes, the sequel to Legend of Condor Heroes). 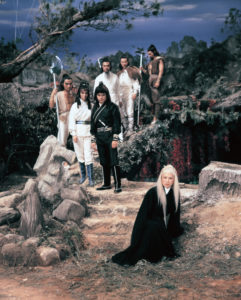 The historical context is also important. Understanding the historical background is particularly helpful with the Brave Archer series because so much of the plot relates to real events and figures. And these events are important to China’s sense of national identity. It takes place in the 13th century toward the end of the Jin-Song Wars. The Jin invasion of the Song occurred in 1125 when the Northern Song Dynasty was invaded by the Jurchen. Guo Jing, the main protagonist, and his mother, are raised in Mongolian lands under the protection of Genghis Khan, while Yang Kang, his sword brother is raised by a Jin prince.

The Jin-Song wars resulted in a Jurchen-based Dynasty in the north, and a seriously weakened Song Dynasty in the south. The Song Dynasty moved its capital to Lin’an (Hangzhou) in 1129 beginning the period known as the Southern Song Dynasty. Later, the Mongols would ally with the Song, conquer the Jin, then continue into Song territory as well.

These are the events that form the backdrop of the entire Condor Heroes trilogy.

This is a wuxia film. In wuxia there is more emphasis on swordplay than fists and greater focus on the epic tales and chivalrous heroes. Things sometimes seem more fantastical in this genre, but there are ground-rules to the spectacle. Characters leap extraordinarily high or fly through the air because of Lightness Kung Fu. They channel internal energy and unleash potent blasts against their enemies because they have cultivated Qi energy. Brave Archer 3 and the story on which it is based are part of this genre. 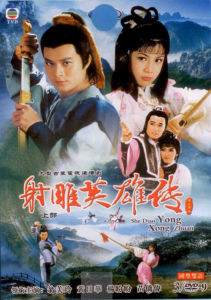 Legend of Condor Heroes has been made into multiple series. This is the 1983 version with nearly 60 episodes.

Perhaps most importantly is the context of the story itself. Like many wuxia films, Brave Archer 3 (and the whole series) is based on a novel. Brave archer isn’t just based on any wuxia novel. It is based on a story that is so beloved that it’s been made into countless movies and television series: Legend of Condor Heroes. It is one of the genre’s definitive works.

This is key because the film assumes a certain level of familiarity with original source material. Keep in mind that Legend of Condor Heroes is a massive novel and even three films isn’t quite enough space for all the material.

Legend of Condor Heroes was the first in a trilogy of books written by Jin Yong (also known as Louis Cha), which first appeared serialized in the Hong Kong Commercial Daily in 1957. As stated before, it has been made into countless television series, films and even parodies. Technically the Legend of Condor Heroes storyline is completed in a fourth film, Brave Archer and His Mate (also directed by Cheh), but there it serves more as a prelude to the next story in the trilogy: Return of Condor Heroes.

Brave Archer 3 is a film that benefits from familiarity with the source material. However the original novels have not officially been translated into English. They can be read through fan-translations online or through synopses. One can also watch the many television series based on the books to get the basics of the storyline. While it is easy to enjoy the wild swordplay, the epic locations and compelling characters without doing so, it really enhances the viewing experience if you read a description of the book’s story or go to the source material directly because you instantly know what is going on when time requirements force them to pack in a lot of detail or skip over plot beats.

In movies like this one, the audience was expected to have some knowledge of the storyline and surrounding history (though in fairness Brave Archer comes before the storm of television series adaptations in the 80s, 90s and beyond), and fitting a story that size into a series of 3-4 films, requires focusing on key beats. So while it can appear crazy if you watch it without knowing the context, it makes a lot more sense and has a lot more power if you view it in light of the source material. That makes it much easier to appreciate the strengths of the film.

Duan Zhixing’s guardians are just a few of the characters that make this movie a must-see.

Brave Archer 3 has a good amount of action, great performances and is filled with interesting characters. While this isn’t quite the ending of the story (that is dealt with at the beginning of Brave Archer and His Mate), it is a fitting finale to the series. 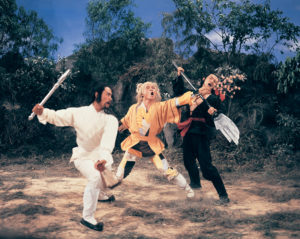 Philip Kwok as Zhou Botong is a fan favorite in the Brave Archer series.

For me, what really makes the Condor Heroes story work, and why it is so enjoyable here, is the characters. Brave Archer 3 does a good job of conveying this. The villains, the heroes and even the side characters are all so well drawn and have such huge force of personality. Interestingly, the main hero, Guo Jing, is virtuous but somewhat dim-witted, raised by the Seven Freaks of Jiangnan and his mother on the Mongolian steppes. He is the opposite of the more cunning Yang Kang (his sworn brother, who doesn’t make as much of an appearance in part three). He is also the opposite of his lover, Huang Rong. She is highly intelligent and raised by the heterodox master of Peach Blossom Island, Huang Yaoshi. One of the most delightful characters (both in the movie and the books) is Zhou Botong. Botong is childish and full of reckless energy. He is played wonderfully by Philip Kwok in all three films (and Philip Kwok’s physical talents brings a great deal to this role). Ti Lung is highly convincing as Duan Zhixing and Lo Meng makes for a menacing leader of the Iron Palm Sect.

Brave Archer is a thrilling movie and quite enjoyable but it strongly benefits form awareness of the source material.

*A fourth film, Brave Archer and his Mate, follows this one. However this can be confusing because it isn’t simply an installment in the series, it is based on the second book in the Condor Heroes Trilogy so something of a new story on its own (but it ties up the loose ends of Brave Archer 3). Added to the confusion is the fact that Alexander Fu plays a new character and the role of Guo Jing (which he played in Brave Archer 1-3) is played by Philip Kwok.

Brendan Davis is a writer, game designer and wuxia film enthusiast. You can read many of his reviews at the Bedrock Blog or watch his videos on YouTube. He recently released a wuxia tabletop RPG called Wandering Heroes of Ogre Gate.