Posted at 18:55h in News by Matt L. Reifschneider
Share

Celestial Pictures has been very effective and efficient recently releasing the Shaw Brothers collection as digital releases for rent and to own in the US, giving fans in this area of the world some films that had never had official home video releases. There are a lot of us though that are full-on collectors and love to have physical releases too. I just received my copy of their most recent release, The Boxer from Shantung and I couldn’t be happier with it. I already own an imported DVD and a digital copy from Google Play, but I had to have the Blu Ray too. The key to selling physical copies anymore is to appeal to collectors specifically. Offering them robust releases, films that have yet to be upgraded in HD, ones that are out of print, or box sets with collectors packaging are the way to make the audience want to upgrade. The 36th Chamber box set is the perfect example of doing just that. Yes, the original 36th Chamber of Shaolin did receive a Blu Ray release via Dragon Dynasty in the US a handful of years ago, but the beautiful packaging and addition of Return and Disciples made that box set a must have for collectors.

This brings up a question for collectors though. What other box sets would we love to see from Celestial Pictures featuring some of the best (and missing) films from the Shaw Brothers collection that could benefit from the upgrade to Blu Ray? To look into this question, I’ve come up with a top ten wish list of box sets I would love to see released for collectors like myself. Many of these films already have home video releases throughout various places in the world and Celestial Pictures may have already released the HD version to own digitally, but the majority of them do not have Blu Ray releases and many of them are out of print, so these are more than welcome in my collection. Nonetheless, speaking as a Shaw Brothers fan and movie collector, here are my top ten picks for Shaw Brothers Blu Ray box sets I would love to see released in the future.

Feel free to leave some feedback and let us know what movies, sets, or releases you would love to see get the upgrade treatment! 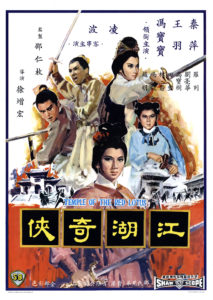 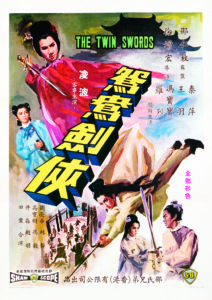 10- Temple of the Red Lotus Series

For this list, I’m going to start with my biggest wild card pick by saying I would like to see a release that features the films Temple of the Red Lotus, The Twin Swords, and The Sword and the Lute. This is a directly connected trilogy that features both early roles for Lo Lieh and Jimmy Wang Yu for the Shaw Brothers and one that showcases some of the unique elements of the early years of the studio. It’s not a well-known series by any means and many hardcore fans may not even know it was a series (I admit I was in the dark until I started watching them myself), but that’s also the reason that they could use an upgrade. For those die-hard fans, this series has weight for its historical significance to the studio as an era when Shaw Brothers cinema was beginning to find its voice and it’s an undiscovered gem that too many fans overlook. It may not be one of their biggest sellers if it gets a release, but those who dig in will most definitely be appreciative of it. 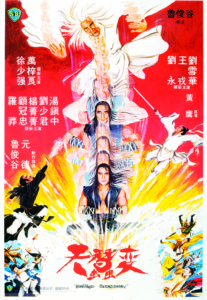 These two films received solid DVD releases in the US via Funimation a handful of years ago, but both are now out of print and go for insane amounts of money on third party sites like eBay and Amazon. That makes them ripe for re-release as their cult status grows. Not only that, but both films are, in themselves, insane in style and the upgrade to HD would be more than welcome for a lot of the fantasy elements that are used visually for the films. They are fun and outrageous later era Shaw Brothers films that have rightfully earned their following. Fans and those who haven’t had the chance to pick up the physical releases due to the DVDs being out of print will definitely want to add this to their collection. 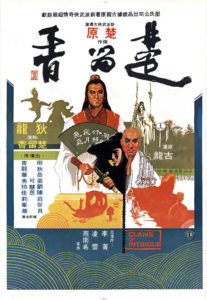 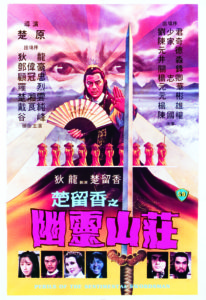 This is another series that many of the more casual martial arts fans may not even realize is a series. The character of Liuxiang, portrayed with playful regard by Shaw Brothers star Ti Lung, was featured in three films – Clans of Intrigue, Legend of the Bat, and Perils of the Sentimental Swordsman (the final one is not a sequel to the Sentimental Swordsman series despite its title). Clans and Perils have never received an official physical release in the US and the films’ blend of wuxia, Sherlock Holmes style mystery, and Chor Yuen’s robust visual talents make them insanely fun to watch again and again – adding to their worth as a box set release. Perhaps I’m a bigger fan of the series than most Shaw Brothers fans, but this one is so much fun and unique in flavor that it could garner more fans with a box set release. 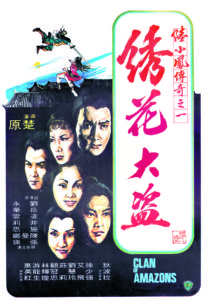 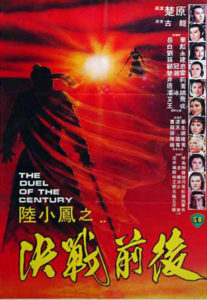 Another Ti Lung lead series, the Xiaofeng films – featuring Clan of Amazons and Duel of the Century – could even be added to the previous box set that made it to #8 on my list. Not because the films are of the same series, no, but because they feature a lot of the same tone and feeling. Both feature Ti Lung in the lead, detective driven plots, and plenty of outrageous wuxia action. While my personal feelings tend to side with the Liuxiang films for their fun and off the cuff characters, it would seem fans tend to prefer these films overall and so it just cuts in front of the previous series on this list. Again, the two films in this series are better watched together, so dropping a box set with the two would be the most ideal situation.

Oh look, it’s almost like Ti Lung and wuxia go hand in hand with the terms ‘awesome’ and ‘franchises.’ The two films in this series featuring Ti Lung as the titular sentimental swordsman are insanely fun pieces of cinema bursting with fantastic casts and phenomenal direction from Chor Yuen. Akin to the previous two entries on this list, these films would also benefit from the HD treatment and work better as films watched back to back than on their own. While there is a third film that features the term ‘sentimental swordsman’ in the title called Perils of the Sentimental Swordsman, that film is actually part of the Liuxiang series and not this one. Although, I wouldn’t complain if they just threw all five films into one box set either. 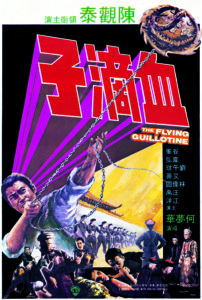 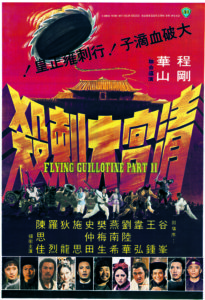 There are a lot of marital arts fans that would lose their heads over anything that features a flying guillotine. Throw together a collection of Flying Guillotine and its sequel and the collectors will most definitely come out to buy. Both films did receive DVD releases from Dragon Dynasty a few years ago and the price of those releases are remarkably low, but the cover artwork is damn near atrocious and the fan base for these films would love to support an upgrade just for that. A true dream come true would be getting some kind of collector’s box set of these films on Blu Ray with a replica flying guillotine, but at this point I’d just take the films. Beggars can’t be choosers, you know. 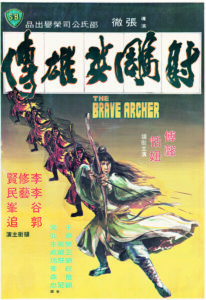 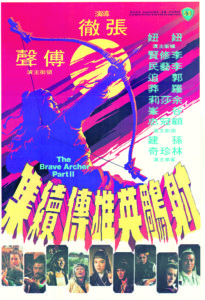 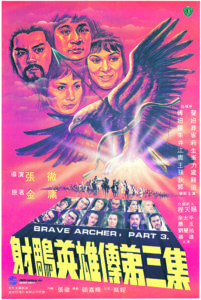 At this point, I’m pretty sure it’s well documented that I’m not a huge fan of the Brave Archer series. They do get better with each entry when the films add in various members of the Venom Mob, but overall I can’t say I’m the series’ biggest fan. However, this series has a lot of very devout followers and being able to score all three original films (or four if you want to include Brave Archer and His Mate) in one set would definitely be a find. Particularly because only the first Brave Archer received a home video release from Tokyo Shock years ago in the US before the studio went under briefly and quit releasing new movies. A box set that features the full series would definitely appeal to the fan base and that’s why it came up so high on my list despite my own issues with the films. 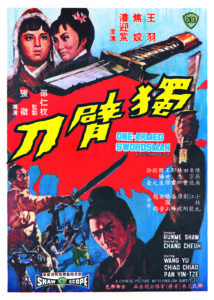 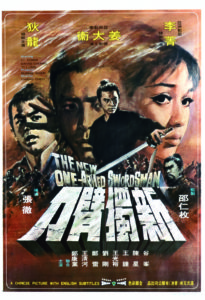 This one might be the most difficult to make an argument for, considering all three films of the trilogy have seen Blu Ray releases previously in at least one country. While I have never seen the first set of Blu Ray releases for these films, the reviews for the releases themselves tend to be luke warm at best and from I gather, they seem to be DVD up scales rather than full HD versions which now exist. So a proper box set featuring the films would be more than welcome to a lot of collectors. The One-Armed Swordsman films are all classics, some of the most loved Shaw Brothers films of all time, and dropping a slick box set would sell very well if marketed right as a true HD release. 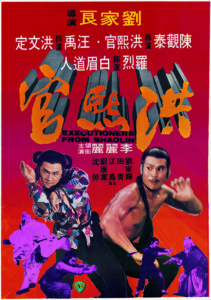 2- Executioners from Shaolin and Clan of the White Lotus

True, these films are not technically part of the same series and can only be suggested as sequels in the loosest of terms, but both of them are highly regarded films in the Shaw Brothers collection and a double pack of the films would definitely find its audience quickly. It helps that both films feature the character Pai Mei in some form (and in White Lotus, his brother) whom western audiences may recognize from Tarantino’s Kill Bill films. Use that as a marketing approach, balance it out with a reasonable price for collectors, and this set will find some solid sales. 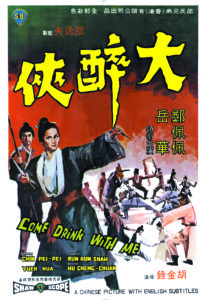 1- Come Drink with Me and Golden Swallow

Come Drink with Me and its follow up Golden Swallow may have already received some solid DVD releases via Dragon Dynasty here in the US, but a double pack of the Chang Pei Pei lead classic Shaw Brothers films would be a massive seller for collectors. With the recent release of King Hu’s A Touch of Zen via Criterion Collection (and a Dragon Inn release rumored to be on the way), martial arts fans are going to want to add King Hu’s lone Shaw Brothers film to their collection. Both films are fan favorites, with the former being one heavily rumored for a remake for years even in western movie studios, and they feature a style and visual touch that would be benefited from the Blu Ray treatment. Not only that, but non-diehard cinephiles will want to add this one to their collection too which makes it my #1 pick.

There you have it, those are my top ten picks for Shaw Brothers physical releases. Now you can easily watch most of these films via digital releases in the US at online retailers like iTunes and Google Play – links to which are available on this site, but don’t be afraid to shoot some arrows and let me know what films from the Shaw Brothers catalog you would like to see get a physical release.