Celestial Pictures | BEHIND THE CAMERA: THE 14 AMAZONS
16528
post-template-default,single,single-post,postid-16528,single-format-standard,vcwb,ajax_fade,page_not_loaded,,qode-title-hidden,qode-theme-ver-9.1.3,wpb-js-composer js-comp-ver-5.0.1,vc_responsive 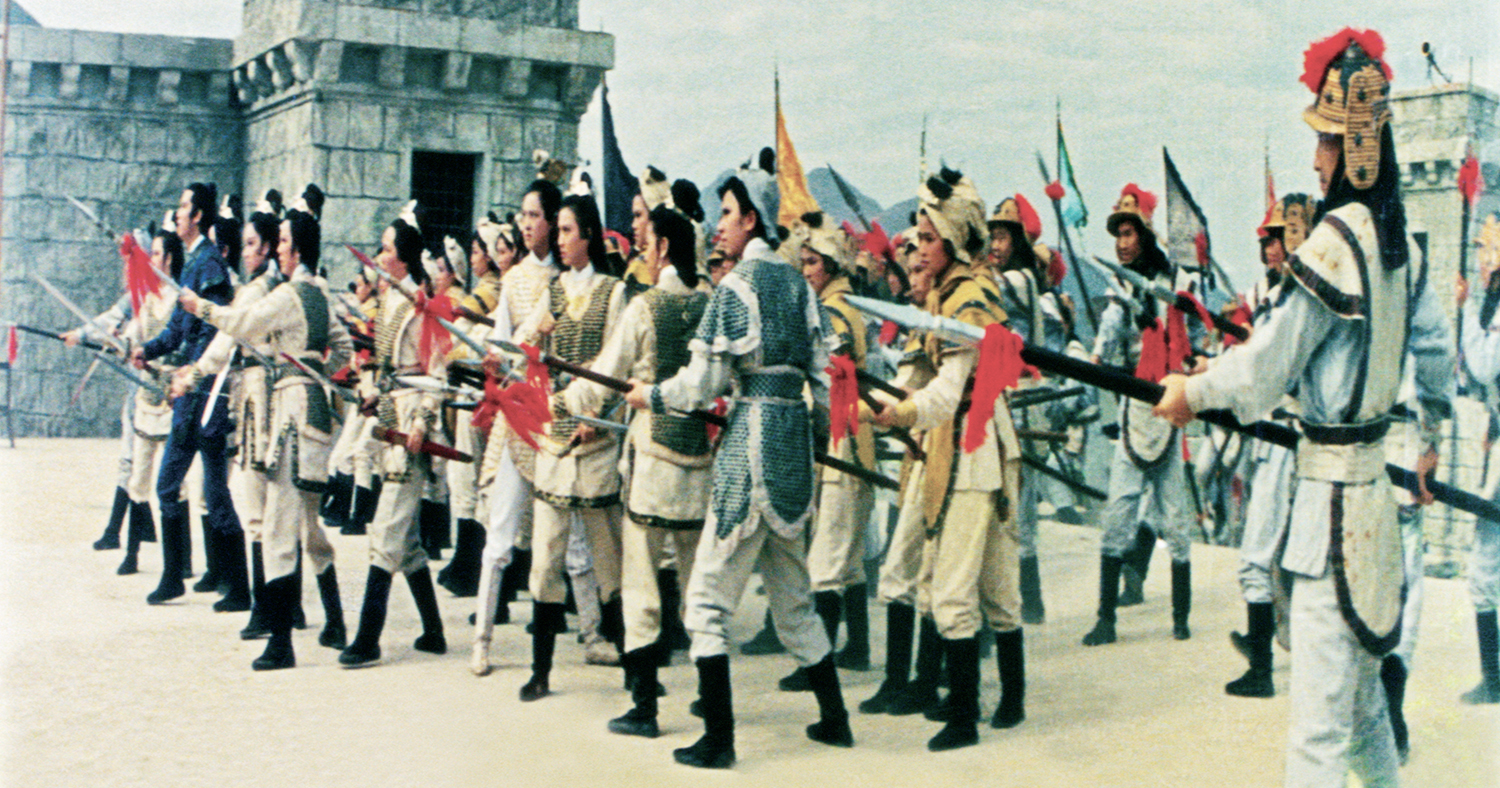 28 Sep BEHIND THE CAMERA: THE 14 AMAZONS

Posted at 17:54h in News by Ric Meyers
Share

The year 1972 was an unsettling transition for the studio. Having let Bruce Lee slip through their fingers, the Shaws, like the rest of the industry, were reeling from his power and impact. Fist of Fury (US: The Chinese Connection), arguably Lee’s best film, had premiered March 22 to unprecedented effect, and while the lot’s wuxia (heroic chivalry) film directors were working as hard as they could, Bruce was uniquely talented, and no one else could match his kung-fu skill or filmmaking savvy.

And that wasn’t all. In addition to Lee, the box office was also being shaken by upstart independent producer/director/writer Ng See-yuen, whose The Bloody Fists appeared in May to break the big-studios’ stranglehold on the audience. To add insult to injury, Bruce’s parent studio, Golden Harvest (run by Shaw defector Raymond Chow) was still reaping dividends by showcasing Angela Mao, whose Lady Whirlwind appeared in June.

The Shaws soldiered on with such traditional, and still popular, fare as The Water Margin (US: Seven Blows of the Dragon) and King Boxer (US: Five Fingers of Death), both of which were to have international influence. Meanwhile, they were prepping several projects to show the world that they weren’t as chauvinistic as supposed. Chu Yuan’s spectacularly successful Intimate Confessions of a Chinese Courtesan was to premiere September 7, but first The 14 Amazons appeared at the end of July.

The screen story was well known via history, legend, and entertainment. Tales of the famous Northern Song Dynasty (960-1127) Yang family were legion in books, movies, and especially the Peking Opera, where The Women Generals of the Yang Family was an oft-performed perennial among forty other Yang adventures that became standard repertory fare.

The women of the Yang family are fearless in this battle epic.

Shaw employee Kao Yang reportedly wrote a staunch script based on this most popular story, but that all changed when the project was put in the hands of studio autocrat Cheng Kang. What he and collaborator Tung Shao-yung had in mind was a pulse-pounding, tub-thumping, knee-jerking, hero-cheering, villain-hissing martial arts melodrama done in stalwart, albeit bloody, Mainland propaganda style, complete with patriotic songs on the soundtrack.

Kang was well suited to understand the average man’s taste. Born in 1924, he left school when he was thirteen, learning instead at a library where he worked as an intern. He left the book stacks, in turn, to tour the provinces as part of a theater troupe that specialized in virulently anti-Japanese plays. It was during this run that he saw what effect good exploitation can have on an audience — a lesson he never forgot.

He continued acting until his mid-twenties, when he wrote his first play, Night Rain in the Empty Garden, to great acclaim. That inspired him to return to school, specifically the Shanghai College of Fine Arts. He moved to Hong Kong in 1949 and continued his writing ways, only now for the burgeoning film industry. After scripting for several companies, he joined the Shaw Brothers Studio, where he wrote extensively but directed prudently, helming on average only one film every few years.

His first for the Shaws was 1968’s The Sword of Swords, and Kang followed up with such crowd-pleasing fare as The Magnificent Swordsman, Gun Brothers, Killers Five, The Twelve Gold Medallions, and Pursuit. Although all his films were profitable, his careful consideration led to his being overshadowed by the far more prolific Chang Cheh, who toiled in the same genres.

According to Cheh, known as the “godfather of the kung-fu film,” Kang’s relatively short filmography came from a strictness bordering on the unreasonable. In his autobiography, Chang relates a tale that when Kang was inspired at 3 A.M., he was so intent on immediately filming his idea that he broke down his producer’s door. His “unyielding character made him hell-bent on making life difficult for others and himself,” Cheh declared. 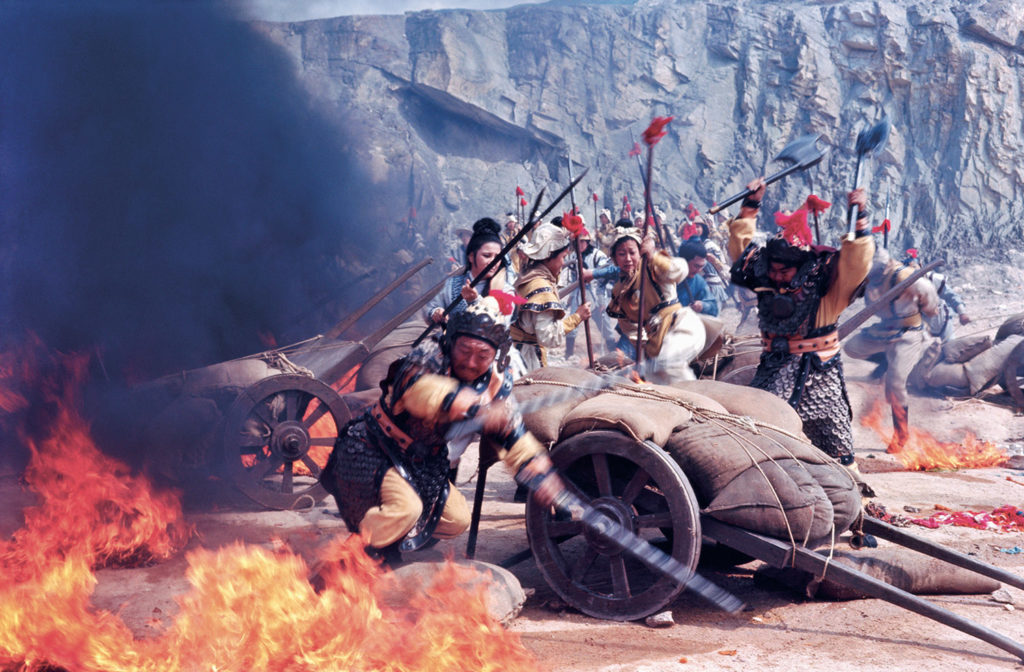 The 14 Amazons is loaded with extraordinary fight scenes.

Only Run Run Shaw could tolerate Kang’s behavior, according to Cheh, and only a big studio like Shaw Brothers could afford him — especially since, unlike Cheh and every other director, Kang never had a film fail at the box office. But after the company’s film units were shuttered, Kang would not change his tempestuous, authoritarian ways. Things got so heated on the set of his first non-Shaw film that star Alan Tang slapped Kang in the face – leading to the shutting down of the production and the director being effectively blacklisted. Kang retreated to Taiwan, became a movie consultant, and never completed another film.

His legacy continued, however, since he was the father of action choreographer supreme Tony Ching Siu-tung. But just because Ching was his son didn’t mean Kang made it any easier for him on set. He gave his then-nineteen-year-old progeny co-stunt-coordinator status on The 14 Amazons (with Liang Hsaio-sung, who also got his middling kicks on Billy Chong’s A Hard Way to Die and Bruce Li’s Iron Finger), but made him kneel and ask for forgiveness if he deemed that the teen made a mistake.

The father’s faith and discipline was well-founded, as Ching took his responsibility very seriously. In fact, the battlefield action in this film clearly set a pattern in the young man’s mind, which anyone can see echoed in such later work as Hero (2002) and especially The Warlords (2007). After getting his feet wet with The 14 Amazons, Ching used his experiences growing up in Master Tang Di’s Eastern Drama Academy to hone his skills on Hong Kong television programs. 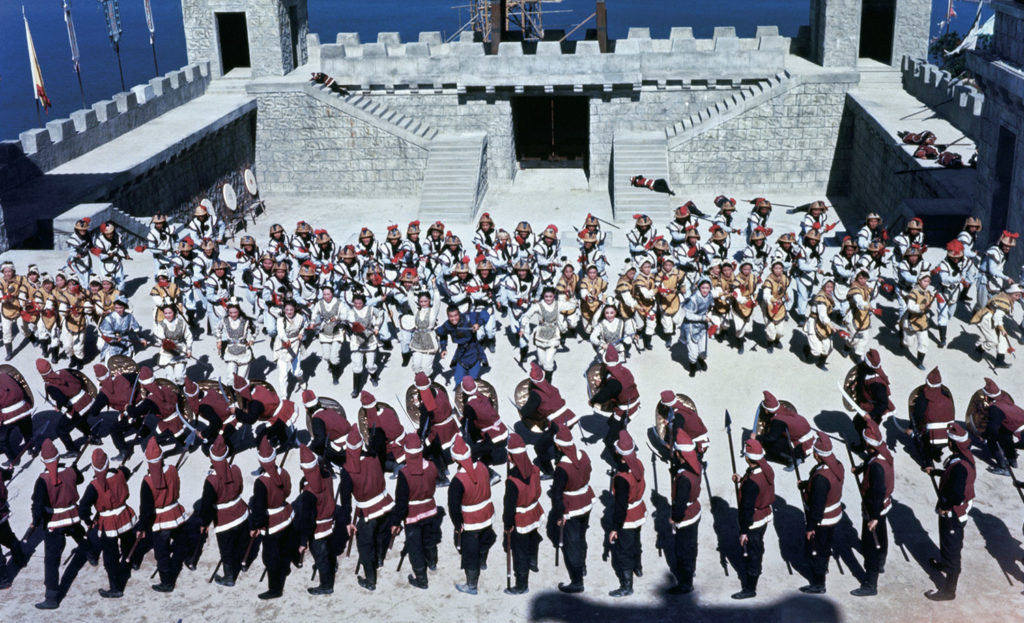 Scenes were loaded with so many extras, the coordination required to pull it off was immense.

When he was ready to direct his first film, he eschewed the then-shrinking Shaw Brothers Film Units to make Duel to the Death (1983) for Golden Harvest. His inventive visual flair brought him to the attention of Tsui Hark, who teamed with him on a series of phantasmagoricals for Cinema City, including the Chinese Ghost Story series, the Swordsman series, and Dragon Inn (1992).

Ching soon discovered that shifting from kung-fu choreographer to director on a variety of projects was a great way to salve his ego and protect his creative equilibrium. So he embarked on a remarkable career, leading or contributing to such landmark productions as Stephen Chow’s Royal Tramp 1 and 2, Tsui Hark’s Peking Opera Blues, John Woo’s A Better Tomorrow II, Jackie Chan’s City Hunter, Johnnie To’s The Heroic Trio, Andrew Lau’s The Storm Riders, Zhang Yimou’s House of Flying Daggers, and many others.

Together, the father and son team put their inventive stamp on The 14 Amazons, and the child had much to admire and emulate (as well as avoid and eschew) in the parent, who not only scripted and directed the passionate, energetic, slightly crazed film, but wrote the lyrics to the movie’s songs as well. Despite competition from Bruce, Angela, and encroaching independent productions, it went on to become the fourth-highest-grossing film of the year as well as rabid award bait.