Celestial Pictures | BEFORE THE CAMERA: THE 14 AMAZONS
16514
post-template-default,single,single-post,postid-16514,single-format-standard,vcwb,ajax_fade,page_not_loaded,,qode-title-hidden,qode-theme-ver-9.1.3,wpb-js-composer js-comp-ver-5.0.1,vc_responsive

27 Sep BEFORE THE CAMERA: THE 14 AMAZONS

Posted at 21:34h in News by Ric Meyers
Share

To truly put The 14 Amazons in perspective, the Shaw Studio announcing that Lily Ho was to play the child of Ivy Ling Po in this film was tantamount to an American studio announcing that Elvis Presley was to play Frank Sinatra’s son (or to be more accurate, daughter, but more on that later) in an old-fashioned musical to be coincidentally released just after the Beatles invaded the U.S.

Although hindsight dictates that being the fourth largest grosser of the year seems pretty good, this news back in 1972 must’ve set off death knells across the lot. “Only” fourth? For legendary Ivy and red hot HK idol Lily? The aforementioned shadows cast by Bruce Lee, Angela Mao, and Ng See-yuen was dark that day indeed. Just as the Beatles were to lessen the power of Sinatra and Presley on baby boomers, Bruce and his buddies were relegating the Sixties’ superstars to the back of the bus.

Even so, neither time nor odd Asian cinematic traditions could diminish the devotion fans have for these two major female stars. Way back when action films began to captivate Chinese audiences, the accepted adage was that movies were, literally, just for women. Men were too busy bringing home the barbeque pork to waste their time watching films, so only housewives went to theaters. And since no wage-earner wanted his pregnant cook swooning over handsome heroes, every major character on screen was played by a woman.

Naturally, this state of affairs didn’t last long, but even so, it cast a gender-bending spell over the history of South Chinese cinema, which, in turn, set the stage for Po’s amazing ascension. Just like so many “overnight sensations” who had been toiling years before their big break, the girl who would become Ivy Ling Po already had more than forty films under her belt by the time she got to Shaw Brothers. 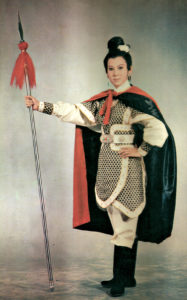 Ivy Ling Po in The 14 Amazons

Born Jun Hai-tang on November 16, 1939, in Shantou, China, the fiercely talented girl had already appeared in her first film by the time she was twelve. Under the name of Xiao Juan, she not only acted in many more, but dubbed singing voices for many others. In fact, she was supplying the singing voice for starlet Jen Chieh in The Dream of the Red Chamber (1962) when director Li Han-hsiang caught sight of her.

Talk about timing. Li was looking for a fresh face to cast as the main character for a traditional “Huangmei” Chinese Opera musical called The Love Eterne (sic). Huangmei, a two-centuries-old form of rural folk song and dance, is typified by a kind of singing that sounds, to Western ears, like scratching a cat across a blackboard. Nevertheless, it was hugely popular in China, Hong Kong, and Taiwan, and the movie musicals made in this lush style were equal to the effect of The Sound of Music. The big difference, of course, is that, in The Sound of Music, Captain Von Trapp was not played by a woman.

In The Love Eterne (a.k.a. The Butterfly Lovers), Ivy Ling Po played the guy in a “guy-meets-girl, guy-loses-girl, guy-dies-from-grief, girl-throws-herself-into-earthquake-chasm, guy-and-girl-love-eternally-as-butterflies” story. To say the movie was well-liked is like saying Stars Wars did okay. Many people saw it more than a hundred times. By the second month of its marathon run, the entire audience sang along with every song. Its biggest hit, a tune called 18 Miles Away, remains a universal touchstone, recognized by everyone who ever heard it.

And, overnight, Ivy Ling Po went from being a dependable actress/singer to being a worshipped household name. Her work was so effective that a special “Outstanding Performance” Award was created just for her at the Chinese equivalent of the Oscars. Sometimes people are prepared to handle such sudden, overwhelming attention, and, thankfully, Ivy was one of those people. She followed up by playing a woman disguised as a male warrior in 1964’s Lady General Hua Mulan, winning another Best Actress Award in the process.

More awards and cross-dressing followed. Although queen (or maybe king) of the Huangmei Opera genre, Ivy spotlighted her versatility with roles in such swordplay films as Temple of the Red Lotus (1965) and “straight” dramas like Too Late for Love (1967), which won her another acting statuette. It wasn’t long before she was being voted top movie star year after year after year.

Following The 14 Amazons, Ivy continued her winning ways. She reestablished her stardom playing the title role in 1975’s The Empress Dowager. Despite the fact that it was essentially a supporting performance, she so dominated her scenes that she won more awards. Seeing no way to top herself, she left the Shaw Studios on a high note, choosing to forge her own way alongside her husband, actor/director Chin Han.

She kept putting in great performances in a wide variety of films, winning more awards as well as accolades, until her semi-retirement in 1987. Fittingly, Ivy returned to the spotlight with a long-running touring stage version of The Love Eterne in 2002, which has led to a spectacularly successful concert career that continues at the time of this writing. 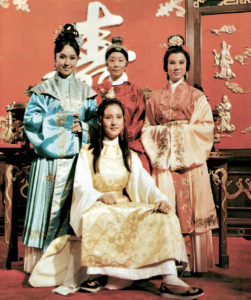 Lily Ho (center) playing a young boy in The 14 Amazons, shown alongside the remaining women of the Yang family.

The next “big shocker” Shaw Studio had for its 14 Amazons audience was that Ivy Ling Po wasn’t going to be in drag, but “the Ann Margaret of the East,” Lily Ho, was. She got to play the extremely unconvincing son of Po’s character, going wildly against type, not to mention gender. When she was first swept up into the studio crop of promising starlets nine years prior, she was termed “an adorable (15 year old) student” who had been discovered in Taiwan and brought over to Hong Kong for grooming.

That grooming turned out to be more successful than almost anyone imagined. Free-spirited and fascinated by fashion, Lily was willing to do what now might be termed “a Miley Cyrus.” But exposing your back for Knight of Knights in 1965 Hong Kong was even more controversial (and attention-getting) than doing it in a 2008 magazine. By the time she blossomed in the tearjerker My Dream Boat (1967) she had developed into an attractive, capable actress who could be both sweet and sultry.

She was also very versatile, and whatever the Shaws threw her into — be it kung-fu (1967’s Angel with Iron Fists), thriller (1968’s The Brain Stealers), musical comedy (1969’s The Millionaire Chase), romance (1970’s A Time for Love), swordplay (1971’s Lady with a Sword), or uncategorizable (1972’s The Casino) — she acquitted herself admirably. But 1972 was the year that cemented her superstardom. Not only did she win the “Outstanding Lead Female Performance” award for playing a boy in 14 Amazons, but she scandalized, tittilated, and delighted fans via her “hot-girl-on-girl action” with Betty Ting Pei in Intimate Confessions of a Chinese Courtesan just a few months later.

The resulting furor had little effect on her, since she also appeared in a half dozen other films that year, was already working hard on three more, and had a plan for her future which didn’t include the phrase “movie star.” After more than forty films in just a decade, Lily married a shipping magnate and waved farewell to the Shaw Brothers in 1975, having already established herself as a tastemaker and clothes shop owner. 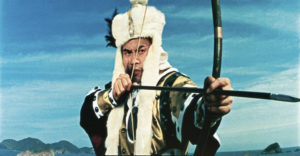 Although the cast of 14 Amazons is filled with other notable stars, it would be remiss not to mention the main villain, whose task it was to most viciously demonstrate the mindful sadism of the evil invaders. That task fell, as it had and would so often, to Lo Lieh. Although Johnny Wang Lung Wei might be considered the studio’s greatest “pure kung-fu villain” in terms of his fighting skill, Lo’s versatility, acting ability, martial arts chops, and longevity can’t be matched.

Born in Indonesia on June 29, 1939, with the name Wang Lida, Lo moved to Hong Kong as a teenager, and miraculously avoided the standard operating racism that favored Hong Kong-born Chinese actors in the competition for parts. Despite Lieh’s “exotic” looks, his talent led to him securing both heroic and villainous roles shortly after his Shaw Acting School training.

Starting his nearly forty-year career in 1965, he became an international superstar in 1972’s King Boxer (a.k.a. Five Fingers of Death), and never looked back. He was such a valued contributor that the studio allowed him the rare freedom to move between their productions and movies made for his own company, as well as independent producers.

Although he directed a few films (most notably 1979’s The Clan of the White Lotus), being behind the camera was not to his liking. With more than two hundred performances to his credit, it’s hard to narrow down a “best of,” but perhaps his most revered appearances came in Liu Chia-liang’s Executioners of Shaolin (1977), where he indelibly stamped the role of white-haired Shaolin betrayer Pei Mei, (who Quentin Tarantino borrowed for Kill Bill), 36th Chamber of Shaolin (1978), Dirty Ho (1979), Mad Monkey Kung-Fu (1979), Billy Chong’s Kung Fu from Beyond the Grave (1982), Sun Chung’s Human Lanterns (1982), Jackie Chan’s Mr. Canton and Lady Rose (1988), John Woo’s Just Heroes (1989), Donnie Yen’s Tiger Cage 2 (1990), and Jackie Chan’sSuper Cop (1992, aka Police Story 3).

Lo worked until the end, supplementing his movie career with an extensive Hong Kong television resume. He died November 2, 2002, in Shenzhen, Guangzhou, China, having played a vital part in the golden age, new wave, and beyond. No matter what the role and cost of production, Lo Lieh always brought his best — whether it was to give an extra gleam in his eye, sneer on his lips, or quantum of humanity to even the basest of characters.