30 Sep BEFORE THE CAMERA: LIFE GAMBLE

Posted at 20:57h in News by Ric Meyers
Share 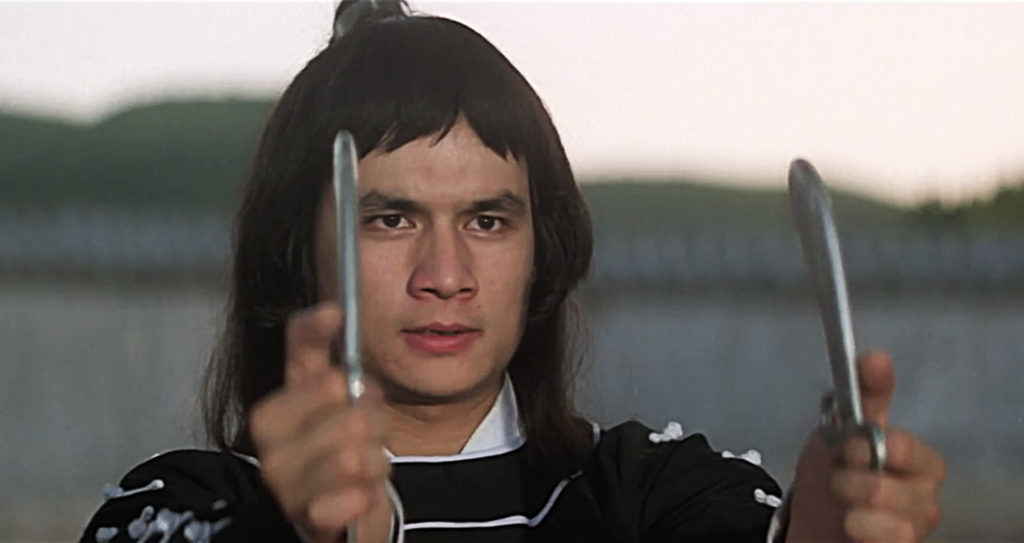 Alexander Fu Sheng was a remarkable actor, having, at different times, been referred to as the Bob Hope, or Jimmy Cagney, or even the James Dean of Hong Kong. He was equally adept as a lecherous comic, a pugnacious, wise-cracking hero, or as a brooding rebel (who, coincidentally, died way too young in a tragic car crash). Like Cagney, he was also a beloved collaborator who elicited nothing but praise from every director and actor he worked with. His untimely death in 1983 so affected his friend, master martial art moviemaker Liu Chia-liang, that the director’s work has never been the same.

Born in 1954, Sheng enrolled in the very first year of the Shaw Studio’s Actors Training School when he was only sixteen years old. Chang Cheh immediately took to the budding teen star and made him a major star in such films as Men from the Monastery (1973) and Shaolin Martial Arts (1974). There began an impressive run of starring in almost two dozen Chang Cheh films before his natural charm, grace, and ability brought him to the attention of other directors.

He soon became a favorite of Sun Chung and Chu Yuan as well, who featured him in Avenging Eagle (1978), Deadly Breaking Sword (1979), The Proud Twins (1979), and Return of the Sentimental Swordsman (1981), among others. But it was the Liu Chia family who encouraged his comedic skills, especially in the wake of some ominous on-set accidents which ultimately left him with two broken legs.

In his comeback film after recuperating, The Treasure Hunters (1982), then in The Fake Ghost Catchers (1982), Cat vs. Rat (1982), and Legendary Weapons of China (1982) – directed either by Liu Chia-liang or his brother Liu Chia-yung – audiences delightfully discovered Sheng’s mischievous, clever, witty side. Other directors, such as Hsu Hsia, and comedy specialist Wong Jing, rushed in to take advantage of his ingratiating humor for, respectively, Ghosts Galore (1983) and Hong Kong Playboys (1983). His future outside Shaw Studio walls seemed assured.

Sheng participated in Wits of the Brats (1984) for Liu Chia-yung and was working on Eight Diagram Pole Fighter (1983) for Liu Chia-liang when he was killed in an car accident on July 7, 1983, at the age of twenty-eight. Liang barely managed to finish his film (by giving most of Sheng’s role to Hui Ying-hung’s character), and his heartache is apparent in the finished product — which is the most bleak and brutal of any film he’s made. The out-pouring of grief from Fu Sheng’s fans and peers was enormous and lasting. His loss to the film industry as a performer and a friend is still considered incalculable.

Kuo Chue leads the cast of Venoms in this film.

Four of the five “official” Venoms appear in Life Gamble: two top-billed and two not billed at all. Kuo Chue (a.k.a. Kwok Chun-fung a.k.a. Kwok Choi, a.k.a. Philip Kwok Choi a.k.a. Philip Kwok) leads the cast list, as he would for every Venoms film he appeared in. Born and raised in Taiwan, his father was a comic actor, but Kuo was only interested in action. Soon he was training in Taiwanese Opera as an acrobat and stuntman, where Chang Cheh and his choreographer Liu Chia-liang discovered him in 1973.

Because he could do things almost no other Taiwan stuntman could, and was about the same height as Fu Sheng, Chang Cheh brought him to Hong Kong, and made him the leader of what he called “The Third Class” (following the likes of first class man Jimmy Wang Yu, and second class man David Chiang). Chang renamed Chun-fung using a variation of his nickname (which in Taiwanese means “cute”), and off Kuo went on more than twenty Cheh films, culminating with House of Traps in 1982. Afterwards, Chang went off to make Five Element Ninjas (1984) with Lo Meng, while Kuo returned to Taiwan with the other “Boys” to direct Ninja in the Deadly Trap (1985), co-starring Ti Lung.

But the director’s chair was not to his liking, so Kuo embarked on a career that was light on acting, but heavy on action choreography. Among his achievements are superlative work in such classics as Ching Siu-tung’s A Chinese Ghost Story (1987), The Big Heat (1988), Story of Ricky (1992), John Woo’s Hard Boiled (where he memorably played “Mad Dog” and reunited with Lo Meng, in 1992), and Ronny Yu’s The Bride with White Hair (1993), among many others.

Even his international “Black Belt Theater” fans got to enjoy his work, first in Brotherhood of the Wolf (2001), and then in the 007 thriller Tomorrow Never Dies (1997). Presently, he’s considered one of the film industry’s top action choreography talents.

Lu Feng makes a formidable villain with an iron hand. 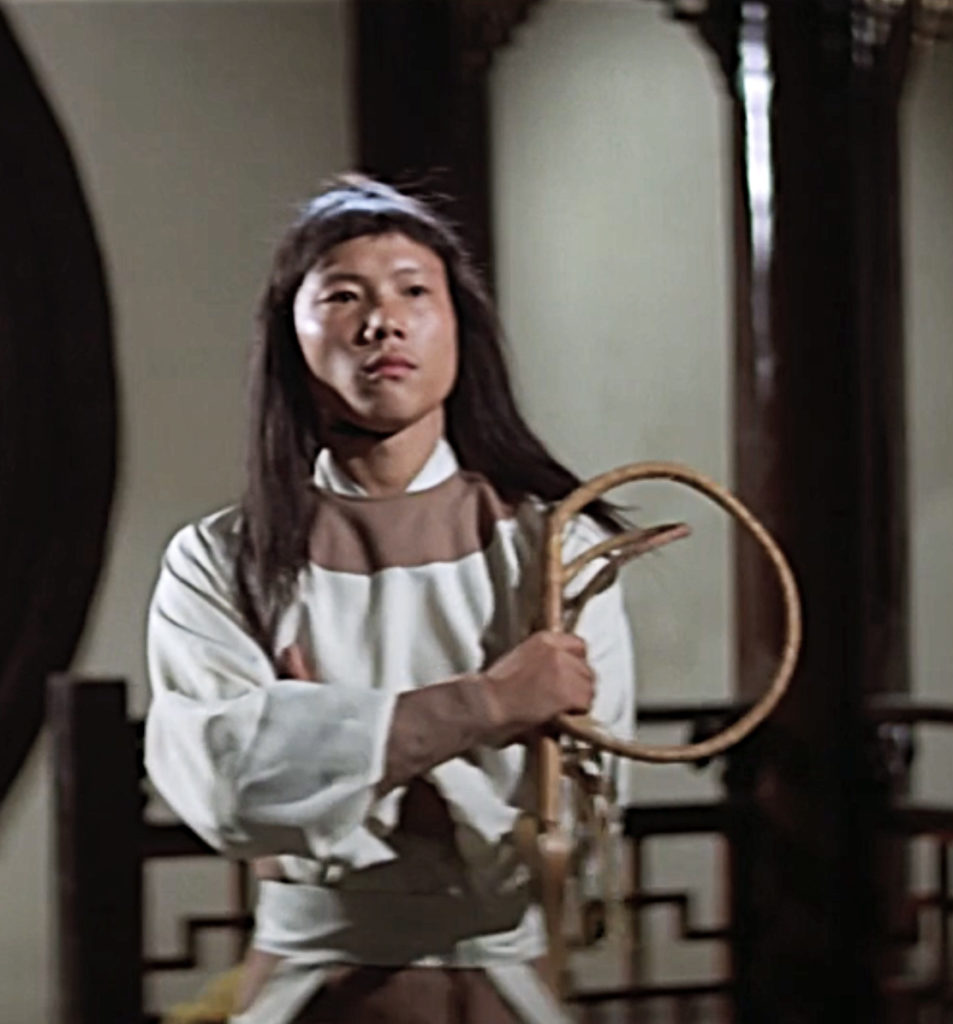 His two Taiwanese friends and co-workers, Lu Feng and Chiang Sheng (a.k.a. Chao Kang-sheng), also appear in this movie as, respectively, a duplicitous metal-handed maniac and a lusting, betrayed whip master — but neither are mentioned during the opening credits or on the official cast list. Like Kuo, they were discovered by Chang in Taiwan and brought over to star in Hong Kong, but unlike Kuo, they did not have the luck to make a go of it outside Shaw Studio walls.

While Lu, who was always saddled with the villain roles, was an intensely private man, Chiang (known as “cutie pie” by his adoring “Black Belt Theater” fans) took things more personally. When his work as Chang’s co-choreographer and assistant director didn’t lead to bigger things, Chiang reportedly turned bitter and self-abusive. He died in 1991, at the age of forty, of a heart attack. Kuo Chui has been widely quoted saying that his friend was alone, depressed, drinking heavily, and actually died of a broken heart. 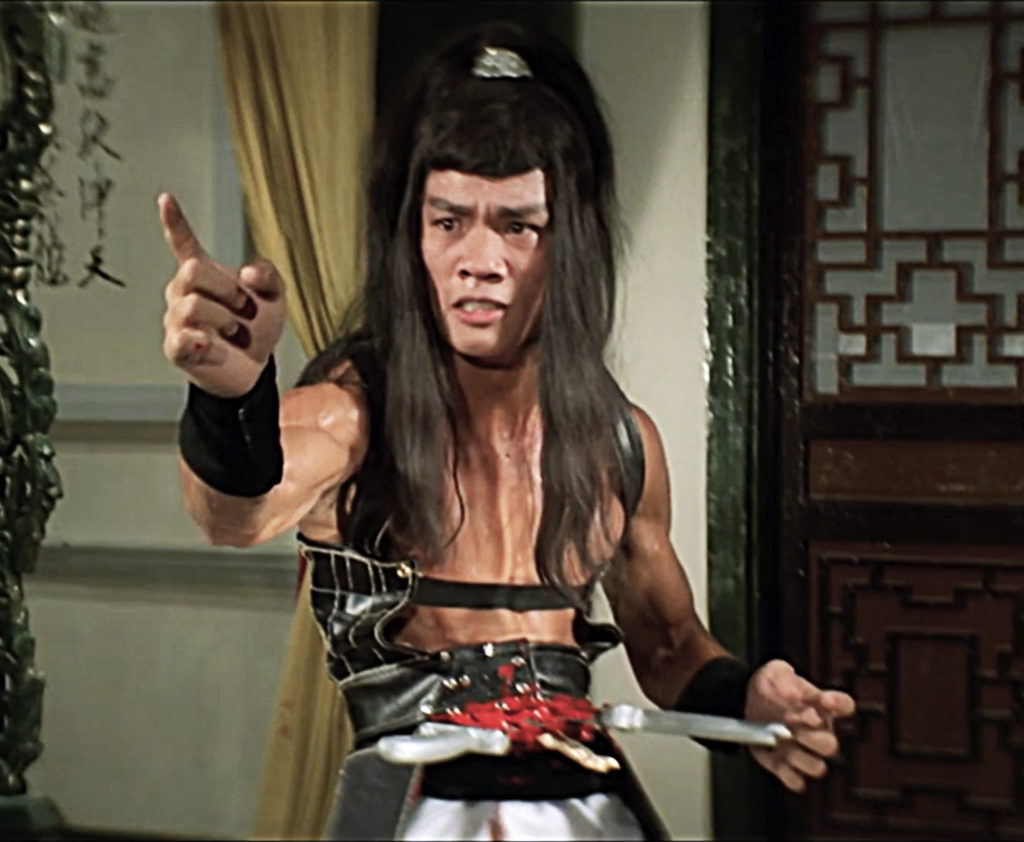 Spoiler Alert: Lo Meng dies in this one.

Lo Meng (a.k.a. Lo Mang) shares top billing with Kuo Chui in this film, among other things. Like Kuo, he was able to create a career for himself away from Chang Cheh, but unlike Kuo, he stayed within Shaw Studio walls when the Taiwanese Boys headed home – giving a memorable performance in the director’s last great film, Five Element Ninjas (1982).

Born in China, Lo started kung-fu training in his early teens, and takes pride in working out every day. He also takes just pride in many of his non-Chang Cheh performances, including such stand-outs as Lion vs. Lion (1981), Clan Feuds (1982), Bastard Swordsman (1983), Secret Service of the Imperial Court (1984), Magnificent Warriors (1987), and Ebola Syndrome (1996), as well as appearances in the Sex and Zen and Troublesome Night film series. He has also supplemented his on-going livelihood with television work.

Finally, Life Gamble boasts performances by two of Shaw Studio’s most impressive artistes. Wang Lung-wei portrays the treacherous gambling boss Mao Kai-yuan while Ku Feng plays the undercover lawman Hsaio Tzu-chin (and father to Liu Chia-liang’s discovery/protégé Hui Ying-hung, who was delighted to play a totally feminine role rather than the woman wushu warrior she usually enacted in such classics as 1981’s My Young Auntie).

Ku was undoubtedly Shaw’s finest supporting actor — a multiple award-winner who has played everything from venal martial arts masters (as in 1978’s Avenging Eagle) to handicapped cuckolds (as in 1982’s Tiger Killer), and everything in between during more than two hundred and fifty performances. Wang was undoubtedly Shaw’s finest kung-fu film villain, able to realistically battle virtually every martial art movie star in more than seventy-five films, yet still be convincing when he inevitably loses (although a notable exception is one of his favorite roles, in Liu Chia-liang’s Martial Club [1981], where he plays a honorable martial art mercenary).

Both men left the Shaw Brothers Studio with heads held high. Of Ku’s subsequent work, his corrupt passive-aggressive lawman in Tsui Hark’s Peking Opera Blues (1986) stands out, while Wang became best known for directing such films as City Warriors (1988) and Bloody Brotherhood (1989) while still taking on Jackie Chan in Project A II (1987) and Twin Dragons (1992). Their contributions here are top-notch, as always.