10 Oct An Appreciation of Writer and Director Sun Chung

Posted at 23:47h in News by Kim August
Share

Taiwanese Director Sun Chung made some of the most original and vibrant movies for Shaw Brothers. From comedies to topical dramas, Women’s Lib styled revenge flicks, exploitation, and popular wuxia (martial arts swordplay films), his unique visual stamp and favored moral theme combined to make some of the studio’s best movies. In honor of Sun Chung’s 75th Birthday today, here is a short list showcasing his most beloved works with some hidden gems too. I’d love all of these on blu ray.

The Avenging Eagle (1978) An Award Winning movie (which included a technical award for Best Editing), this wuxia revenge thriller is so skillfully written, acted and choreographed, it lives up to its hype. Fu Sheng delivers a career best performance here as the mysterious Double Sword in Sleeve, who follows Ti Lung’s reformed assassin Chik Ming Sing on the vengeance trail. The Avenging Eagle and the harrowingly vicious Human Lanterns are the two Sun Chung movies critics and fans speak most fondly about when discussing the director’s filmography. For me, these two movies are the gateway into the director’s distinctly beautiful, painful and energetic stories. To say anything else would spoil this wonderful film, but The Avenging Eagle is one of the greatest Shaw Brothers movies ever released.

Big Bad Sis (1976) A unique triad drama which features the lovely Chen Ping’s unapologetic avenger Sister Ying standing up against her former boss to protect those women working with her in a factory. Leaving some of the sex and violence to the audience’s imaginations is one of Sun Chung’s storytelling trademarks, done here in an interesting fashion. Yet the director and his leading lady, the very bold Chen Ping never forget this is an exploitation movie. Earnest, intense, and full of beautiful ladies beating up the boys, Big Bad Sis is among the most fascinating surprises I’ve uncovered in Sun’s filmography. Shaw Yin Yin lends terrific support as the punch first, talk later Sai Chu; whose little dynamo becomes a blood sister to Ying.

Human Lanterns (1982) A perfectly repulsive morality tale of greed taken to extremes, Sun Chung co-wrote this nasty horror-tinged wuxia with Ni Kuang, and it’s a potent piece of ugliness that remains the best of the Shaw Brothers’ goopy, gory horror films to me. Wronged swordsman Chun Fang gets his chance for revenge when his foe, the status seeking Lung, comes calling. Lung pleads with the emotionally wounded swordsman to make a lantern which would defeat Lung’s peer, the equally snobby Tan, in the annual lantern festival competition. Chun Fang takes his craft a bit too far, as his revenge undoes the Lung and Tan families. If you’re squeamish you may want to skip this one.

Judgement of An Assassin (1977) I’ve read the young hippie-like lead Hei Mo Le was supposed to be Ti Lung, but he could not participate, so the role went to his former costar, David Chiang. Chiang who made counterculture rebels a rousing staple of early 1970s Shaw movies is delightfully here as a young swordsman whose blatant disregard for his elders, women, and authority drags him into a legal clan vs. clan conspiracy of epic proportions. This movie shows a lot of love for its elder characters (Ku Feng is just adorable as Old Hedgehog, while Chan Wai Man is creepy good as the unholy monk and supreme bad guy The Bloody Devil). Judgement of an Assassin is the film that cemented my fondness for Sun Chung’s movies. The inventive sets and make-up design rank among the best from the studio, and I so believed in this world (and wouldn’t mind a lair like Bloody Devil’s pad too). The fights here are very character-centric and delivered with speed, lending a nasty and painful looking reality to some characters injuries. A fine movie on every level, but the obvious love and respect for the folks who populate this celluloid tale make it a must see. You know what else makes it a must see? Three words: Tombstone crushing kick.

The Kung Fu Instructor (1979) A riveting variation on Akira Kurosawa’s seminal Yojimbo, Sun changes the flavor of that famous story by inserting one of the most righteous, good men to roam his 35mm landscapes, the titular Master Wang Yang (Ti Lung). Instructor Wang is forcibly thrown into the mix of a community split by two warring clans, but his stubborn and steadfast commitment to being an open and just martial arts teacher lends a powerful and different tweak on this plot. Some of the most beautiful martial arts in a Sun Chung film are on display here, as Tong Gai pushes Ti through some of the most grueling and stunning circuits. Sun’s creative use of editing, camera angles, and artistic shots add to the greatness of this movie. As much as I adore Ti as the Deadly Breaking Sword and Chik Ming Sing, I think his best all-around performance for Sun was in this film. 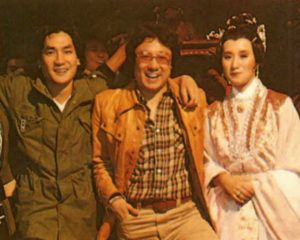 Sun Chung in the middle.

My fondness for Sun Chung’s work grows with each movie I discover. His unique style, superb storytelling, and compelling dramas draw the audience into the films’ realities, with the violent nature of his celluloid worlds only bringing his many talents into even sharper focus. His movies will make you laugh, shiver, cheer, and most importantly, think.