Celestial Pictures | ALL IN THE FAMILY: LEARNING REVENGE AND JUSTICE IN EXECUTIONERS FROM SHAOLIN
17312
post-template-default,single,single-post,postid-17312,single-format-standard,vcwb,ajax_fade,page_not_loaded,,qode-title-hidden,qode-theme-ver-9.1.3,wpb-js-composer js-comp-ver-5.0.1,vc_responsive 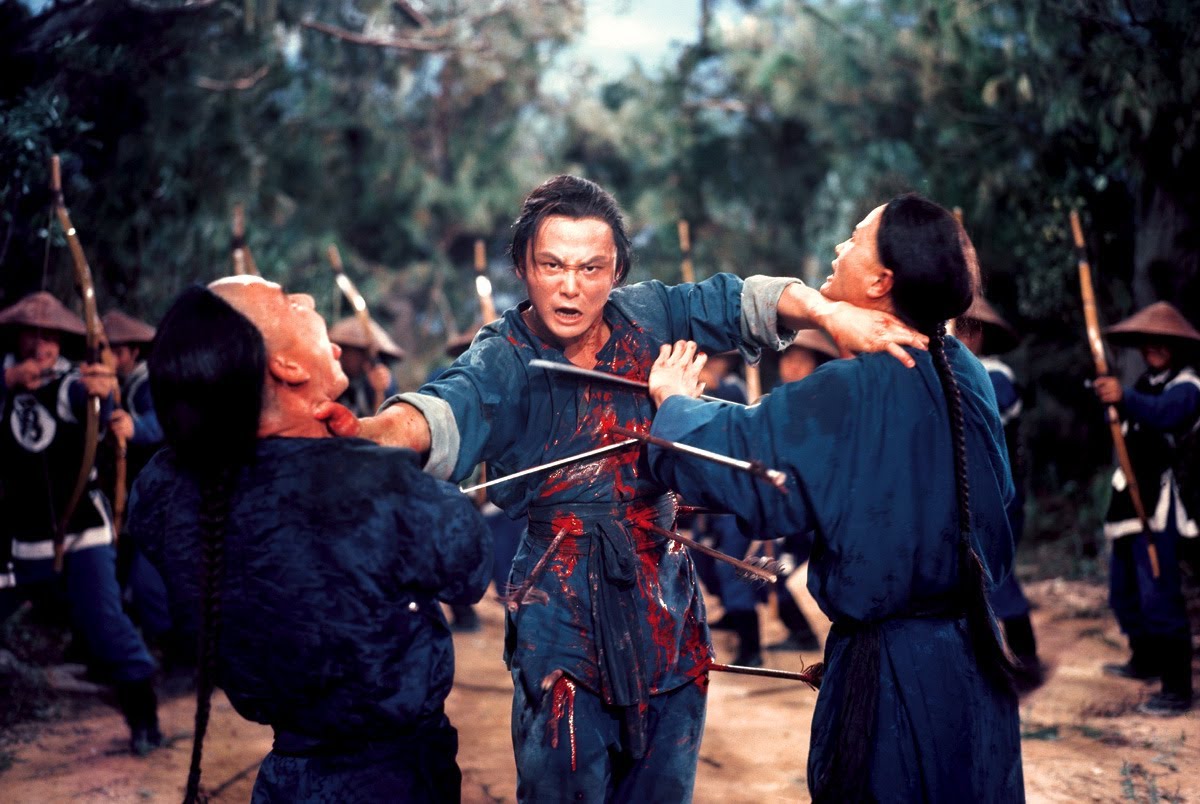 22 Sep ALL IN THE FAMILY: LEARNING REVENGE AND JUSTICE IN EXECUTIONERS FROM SHAOLIN

Posted at 23:47h in News by Celestial Pictures
Share

The historical setting of the Shaolin temple burnings and the aftermath of such is one of the more common backing stories used in Shaw Brothers films. Yet, of all of them, it seems that Executioners from Shaolin is easily one of the most popular. Directed by the iconic Liu Chia-Liang, it’s a film that takes its setting, doubles down on the familial drama, evolves some of the usual themes, and delivers a memorable kung fu spectacle that has connected with martial arts fans for decades. Yet, Executioners from Shaolin does not necessarily take the easy route with some of its themes and approaches that one might expect from a film that is so regularly consumed by even the more casual Shaw Brothers fans. It’s a fascinating evolution of many of the classic themes and concepts from the usual Liu Chia-Liang material and its executed in such a manner that it flows seamlessly into the usual structures and style of the genre. It’s a film that entertains on the surface, but has a remarkable amount of depth that reveals more heart and soul that are revealed with each watch.

Even with its robust action sequences, charming chemistry between the family unit that grounds the film, and the ambitious generational time line that comprises its structure, it’s the major themes about understanding and learning that drive Executioners from Shaolin to being much more than the usual Shaolin flick. These lessons can essentially be divided into two sections for the sake of this article, revenge and justice, and it’s here where one can start to see how the film works on a minimum of two layers, but flourishing into something so much more.

LEARNING REVENGE: The opening of Executioners from Shaolin kicks off the classic revenge tale portion of the film. Using a stark red backdrop, the film introduces the villain of the film first, Pai Mei – played with screen stealing evilness by the always impressive Lo Lieh in a rather subdued manner, as he fights the High Priest of the Shaolin Temple. The film immediately showcases the direct aftermath of the burning of the temples with our main hero of the film, Hong Xi Guan, attempting to flee the slaughter with some of his peers. This establishes the stakes of the film, the challenge that our hero must face, and the reason he will attempt to kill Pai Mei throughout the rest of the film. Like many revenge films, it’s dedicated to one goal, defeating the villain, and does it through classic Liu Chia-Liang elements including extensive training sequences, some fun quirky humor that’s established through Hong Xi Guan’s brothers and family, and explosively well-choreographed fight sequences that increasingly get more complex and dynamic as the film rolls. Executioners from Shaolin an entertaining film in this regard, taking its time in the first act to build the hero and his family dynamic with his son and wife, but never pausing its brisk pace as it builds. The audience loves to hate Lo Lieh’s villain and root for both the father, played with subtle dynamics by Chen Kuan-Tai, and the son in the second half of the film. The gimmicks to drive the plot can occasionally be slightly forced into the script, including a plot point that says our bushy browed villain can only be killed at a certain time of the day (?!), but it remains entertaining enough as a revenge flick to service its audience amd satiate the Shaw Brothers craving.

LEARNING JUSTICE: So as the film showcases its generational plot structure, starting with the Shaolin priest teaching his student Hong Xi Guan and his Shaolin brothers whom in turn teaches his son to drives the revenge story, there is a shocking depth to Executioners from Shaolin that drives home a much stronger lesson about justice. This is perhaps most apparent in a sequence where a much older Hong Xi Guan is off to face Pai Mei and his 17-year-old son tries to tag along. He describes that the death of Pai Mei is not only for revenge, but that the country needs it and so does its people for them to successfully lead a rebellion. Yet, just that sense of straight forward justice does not empower the father and it’s the open-minded approach of the son that eventually leads to justice above revenge in the third act. It’s a classic kung fu trope that is given a unique slant in this film because to serve this justice, it requires thinking in progressive ways beyond the usual. His son, trained in Crane Style by his mother, learns justice by going beyond boundaries and learning things on his own to combine his father’s Tiger Style with what he has already learned from his mother. Interestingly enough, this is also exemplified by the son’s physical appearance. The audience is very much aware that he is male, but his hair and initial costuming give him a feminine appearance. There is even a sequence when he is ten that is shown where other kids make fun of him for being “too girly” with his kung fu. It’s a wonderful layer to showcase that his abilities, neither tiger nor crane/male nor female, allows him to combine the best of both that allows him to battle Pai Mei in the final act. Justice can only be served by someone willing to break conventions for everyone, even if it’s initially launched by a need for vengeance. It’s a progressively unique spin that allows justice to be served, but it’s only learned through both his father and mother which is decently unique to the kung fu genre and one of the reasons that this film remains so effective to this day. The message is there, under the usual martial arts set pieces and characters, and it’s delivered with thoughtfulness and heart.

It’s through the entertainment of being a revenge flick and the heart of a film about teaching justice that Executioners from Shaolin deserves to be one of the most beloved films from the Shaw Brothers catalog. On top of that, it’s one of the Liu Chia-Liang films that truly digs into the meaning and training of martials arts as a concept and features some spectacular fights and characters to drive it home, but it’s the prime blend of its layers that lifts it above the rest. This film is one of the best examples of the unique depth that the Shaw Brothers catalog has if one is willing to look. And while the lessons in the film may be about the truths of revenge and justice, the lesson for the audience is that through the tropes and cheese, there can also be art.