Celestial Pictures | A TALE WITHIN A TALE: THE LAYERS OF LAYERS WITHIN THE BRAVE ARCHER 3
17306
post-template-default,single,single-post,postid-17306,single-format-standard,vcwb,ajax_fade,page_not_loaded,,qode-title-hidden,qode-theme-ver-9.1.3,wpb-js-composer js-comp-ver-5.0.1,vc_responsive 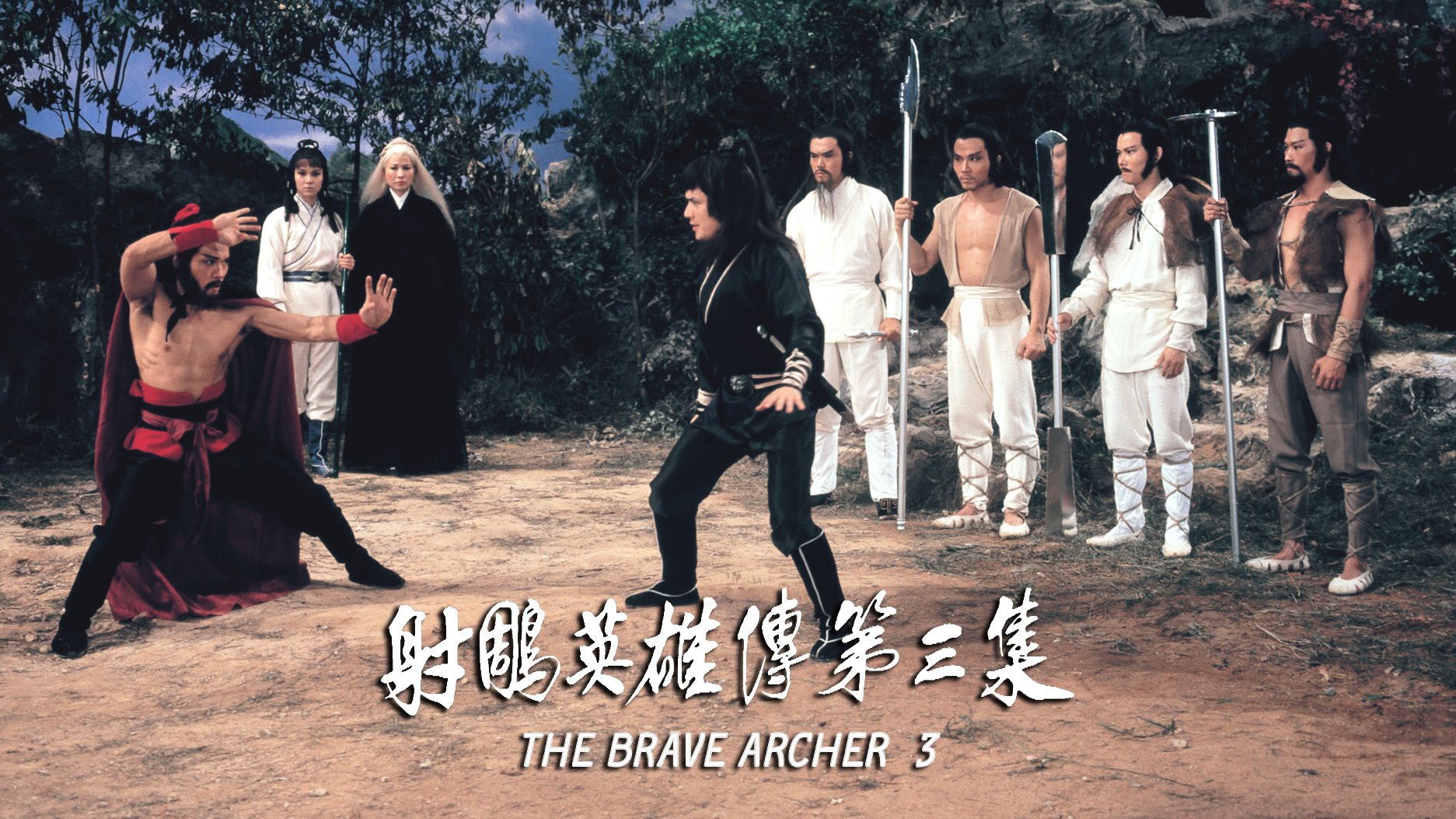 16 Sep A TALE WITHIN A TALE: THE LAYERS OF LAYERS WITHIN THE BRAVE ARCHER 3

Posted at 01:07h in News by Celestial Pictures
Share

The Brave Archer series is one of the more perplexing and often talked about Shaw Brothers releases. Based on the novel The Legend of the Condor Heroes, the series feels more complete when consumed as a whole, but each entry certainly feels like one chapter of a much larger story. Like many series that require some dedication from its viewers and overlapping elements of characters, narrative, and plotting, each entry on its own suffers a bit in being able to fully deliver a ‘full story within the story’ which can be a detriment to the singular films of the series. However, for those willing to put in the effort to watch all three (and completely obliterate their sense of disbelief for the ridiculous sequences, characters, and concepts that this series throws at them) then there is a lot of fun to be had with the three initial Brave Archer films. It’s fun that is continually punctuated by the talents of its cast and willingness to run with its wuxia elements.

Now that the context of The Brave Archer series is out of the way, this article is going to focus on the third entry of the trilogy (which is followed up by two “unofficial” sequels in Brave Archer and His Mate and Little Dragon Maiden for those interested) simply titled The Brave Archer 3 or various incarnations of such. On a personal level, The Brave Archer 3 is my favorite of the trilogy and, despite some larger flaws in its narrative, the increased presence of The Venom Mob is key to this for the sheer entertainment that they bring to the screen. It’s just smart to remember with any film in this series that it’s all about the context and layers of its story and characters.

Like the second entry into this franchise, The Brave Archer 3 suffers from being a continuation of the series’ previous installments. The opening sequence, which briefly recaps the ending of Brave Archer 2 and how our hero Kuo Tsing and his companion/girlfriend Huang Rong essentially fall on the wrong side of the highly volatile and vicious Iron Palm Clan lead by Qiu Quan-ren (played with impeccable presence by Venom Mob member Lo Meng,) is only there for the context. Remember this, dear Shaw fanatics? It doesn’t explain too much, particularly how some characters and their backgrounds will come into play later in the film, but it’s there nonetheless. From that point, the film quickly moves into its real plot by having our two heroes try to find a cure from the Iron Palm strike – that will eventually kill Huang Rong -that leads them to trying to find the Emperor Duan (now turned monk). They quickly find there is much more to Duan’s story than expected and they end up wrapped up in an entirely new adventure that somehow connects to some people from their past.

The focus of The Brave Archer 3 is less about continuing Kuo Tsing and Huang Rong’s story and more about how they end up being catalysts for an entirely different plot that’s inherently connected to their past adventures. Don’t expect too much in growing character arcs for the main established characters as this film has no real intention of doing so. Instead, it focuses on telling the story of the various characters around Duan, played with regal style by a bald (!) Ti Lung. The Brave Archer series, as mentioned, was always more in tune about the various adventures of our heroes as a story within a story within a story, so this choice is not so much a surprise in concept as it is a surprise in quality. Unlike the unnecessarily complicated trials and spastic script of the first film or the seemingly wandering narrative of the second film, this third entry strips things down a lot more and it’s beneficial to the cause. The Duan story is far more interesting than our main protagonists that stumble into it and the flash backs to the complications that has brought them together is rather intriguing with its fantastic reveals and twists in the third act. Truthfully, the two main leads seem bland in comparison even knowing that there have been two more films of build their tale. Fu Sheng looks absolutely perplexed throughout the entire film as he is just bounced around and Huang Rong, played by Nau Nau with decent finesse, takes most of the weight of being the main protagonist with her wit in defeating their trials (there are always trials in these films). Still compared to most of the secondary cast, including Ti Lung as mentioned and various Venom Mob members, they seem to pale in comparison and it’s probably a choice for the best of the film.

Indeed, it’s the inclusion of the Venom Mob that truly keeps The Brave Archer 3 entertaining.  Phillip Kwok, portraying Chao Pai Tung in previous entries of the series and reprising his role here as both the elderly insane kung fu master and a younger even more childish version in flash backs, steals every scene he is in. His leap frogging abilities and comedic charms add an entire layer to the film that works to give it a kind of forlorn sadness and humorous spin on the story being told. Some of his fellow Mob members, including Lu Feng and Chiang Sheng, appear as Duan’s four trusty guards and their presence is a huge welcome addition. For fans of the Venom films that may dive into The Brave Archer 3 without seeing previous entries, be warned that it’s fairly light on action until the final 15 minutes or so. However, that finale, which features a plethora of various fights featuring almost every member of the cast (outside of few sidelined by the plot or character elements,) is one of the best that they have ever choreographed and shot with director Chang Cheh. It’s rapid fire kung fu mayhem of weapons, acrobatics, hand-to-hand combat, and a few surprise gory moments. The pacing and complexity is impressive and it caps off the film on a very high note.

Still, The Brave Archer 3 is not a perfect film and suffers from trying to be another chapter in the series instead of something that can stand on its own. It never ties up any of the larger threads and questions that the series poses by the time the final title card pops up and seals the film either which is a tad disappointing. On its own, it’s entertaining in how it juggles its story within a story within a story narrative and the use of its brilliant casting carries a lot of the burden of emotional resonance and momentum to keep the film connected to its audience. The finale is prime martial arts material for the Venom Mob and there are enough cheesy moments to keep it grasping onto its own concept. It’s not a film that should be taken nearly as seriously as it seems to be in fan circles, particularly on its own and outside of the grander scheme of its franchise, but it still comes recommended for a fantastic way to celebrate Shawtember.

Just remember, The Brave Archer 3 is all about context and layers. With that in mind, grab your giant iron palm topped staff and find me at the bottom of the mountain. There’s some climbing and trials to work through to dig into the film and start off your marathon for Shawtember.