Posted at 16:52h in News by Kim August
Share 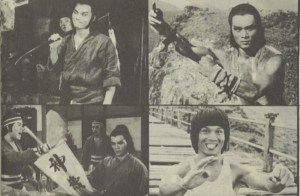 So on his birthday, I’d like to salute the most agile and just of Chang Cheh’s Venoms by mentioning some of my favorite Kuo characters.

While he often played a mirthful man, it is his noble heroes who compel me.

Qiu Zi Yu The Blacksmith (Life Gamble) As the only decent person in a world full of wicked, greedy people, Qiu protects himself and his trade by bartering his craftsmanship for a new kung fu skill. Three years prior, this agreement nearly killed him, forcing Qiu to retire. His enemies know that as long as Qiu lives he is a threat. Possessing a variety of bare handed and weapon skill sets, it is not surprising an enemy would want to set him up. Yet, his just heart and honor will not allow him to stay out of the weapons-making business for long when the King of Jade goes missing. Kuo imbues Qiu with an air of justice and kindness, which instantly makes you root for this humble soul. I love the montage of short training sequences where Qiu masters the Phantom Steps, Silver whips, etc. Life Gamble is one of those movies where Kuo gets to show both his range as an actor and martial performer. The final fight always takes my breath away. In my imagination, a prequel about Qiu’s character exists. Qiu Zi Yu made me a fan of Kuo Chue.

#4 The Lizard / Mr. He (The Five Deadly Venoms) Besides being trained in the most superheroic animal style of the Venoms house (scaling walls etc.), He is also obedient to his Sifu and the Law. When I think of Kuo as “one man against an evil world”, this undercover constable comes to mind. Using his strength, lightness technique, and resolve, He works with the 6th student Yang De to “unmask” and defeat his evil peers. Kuo gives his Venom house practitioner a steadfastly determined and poignant personality. The actor has mentioned his fondness for Charles Bronson, and with Mr. He, the Lizard shares many of the character traits that some of Bronson’s anti-heroes exhibited. The character’s anguish at the corruption around him only pushes the just fighter toward heroism. And how can you not like his house moves? The Lizard looks awesome scaling walls while defeating his peers. Take that, Spider-Man.

Kuo Chue as Venom #4, The Lizard/Mr. He, in The Five Deadly Venoms

Luo the Iron Leopard / (The Flag of Iron) In this remake of Chang Cheh’s The Duel, Kuo plays the role originally assigned to Ti Lung; the young ganglander forced to take the fall for the murder of his master. Ultimately, Luo learns of the conspiracy against himself, the Iron Monkey and the White Robed Rambler Yan Xiu; but will our true heir of the Big Flag clan make it out the circuit alive? Kuo gets to wield a flag here (unlike Life Gamble where Qiu must fight Nan’s team of flag-bearers), thus he and his Venoms cohorts deftly perform one of the most well-known displays of Chinese opera pageantry, but with a deadly difference.

Kuo Chue as Luo the Iron Leopard in The Flag of Iron.

Hero Zhi the Black Fox / (House of Traps) Kuo’s clowning around may not endear him to Butterfly Hua or the conspiring evil Prince Yang, but his expertise in theft and subterfuge allows to him to defeat the titular house and the evil man who uses it against his enemies. Perhaps his toothache looking head wrap is another sign of what a pain in the molars the man can be to wrongdoers? House of Traps boasts one of the Venoms’ most satisfying and intense end fights, as Kuo matches his Opera brother Lu Feng strike for strike, parry for parry. Kuo uses both sword and body to ultimately snare the Black Butterfly, and even gets to deliver the final word.

Kuo Chue as Hero Zhi, the Black Fox in House of Traps.

Sheriff Hai Tao / (The Kid with the Golden Arms) Armed with an ever-present wine jug, this drunken master foils the Chi Sha gang with a cocktail of agility and cunning. Hai becomes more focused as his inebriation escalates, and he assists the heroes and security agency attempt to get their gold to flood-stricken refugees, but he also makes time to help or spare those who may not deserve it. A constant annoyance to Chi Sha #2 (Silver Spear) and #3 (Iron Armor), the only thing Hao fears is an empty wine jug. Hai Tao is a different kind of cop than the seminal Mr. He; this nimble agent of righteousness weighs a person’s traits as much as their martial skill. In Kid with the Golden Arms, you’ll see Kuo’s many martial skills; the way he kills Iron Armor is ingenious, and reveals what a clear thinker and strategist the sheriff can be.

Kuo Chue as Sheriff Hai Tao in Kid with the Golden Arms.

While his mirthful charms entertain, it is Kuo’s superb Opera-born weapons and acrobatic fight skills, combined with a just character, that make him among the most compelling of the Venoms Mob performers. To this day, Kuo Chue still works behind the scenes as an action director, ensuring this talented man will always remain one of the great entertainers from Shaw Brothers Studios.

When she is not watching, tweeting and flexing her pen fu about Shaw Brothers movies, Kim August is channeling her writing qi into articles for shaolinchamber36.com.