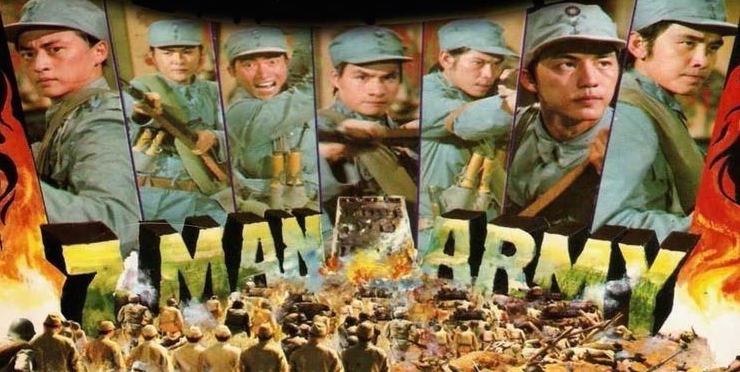 Posted at 08:45h in News by Celestial Pictures
Share

By 1976, Chang Cheh had become tired of making almost nothing but back-to-back Shaolin movies since 1974’s Heroes Two. Looking for something fresh to sink his teeth into, he decided on a genre you don’t see a lot in Hong Kong film: the war film. This gave us 7-Man Army and Boxer Rebellion (which was shot after 7-Man Army but released first). Boxer Rebellion is an atypical war picture that focuses on the boxers who believed themselves invulnerable to the foreigners’ guns. 7-Man Army is more a traditional war film that is an opposite in ways to Boxer Rebellion. 7-Man Army is about a small group of men who know exactly how fragile their lives are, but in the defense of their country, they have no choice but to continue fighting.

7-Man Army tells a true story set a few years after the Mukden Incident, in which the Japanese staged a bombing to facilitate an invasion of China. The events depicted in the film were during the 1933 Defense of the Great Wall, specifically around the Gubeikou area. After a battle, the Chinese took back this section of the Great Wall, but seven men were all that remained of the Chinese forces. Cut off from all communication to their reinforcements, the men dug in and withstood multiple assaults on their position. These brave men were commemorated with a monument on the site of their burial, which can be visited via the Gubeikou Great Wall Kangzhan Memorial Hall. There is also a monument on Kinmen Island, off the coast of Taiwan, called the Badu Tower. It’s also worth noting that the film’s Chinese title (and Wikipedia entry) cites the location as being the Badaling region, roughly 65 miles southwest of Gubeikou. In any case, Chang Cheh is once again fictionalizing a part of Chinese history for the masses, and 7-Man Army is quite successful in this task (although Chang calls the film an artistic failure in his memoir).

Unlike Boxer Rebellion, 7-Man Army is a war film filled with guns, tanks, explosions and everything you’d expect from a traditional war film. I don’t know if the Shaw Brothers ever produced anything else quite like this, so it’s worthy of a watch just for its unique nature. 7-Man Army also takes a lot of time to build its characters through flashbacks that show how each man came to join the army. Each man is important to the survival of the others, and as such, each one is made important to the audience. They are a unit that builds a unique bond over the course of the movie, so when one of them inevitably dies — it’s a Chang Cheh movie, you knew it was coming — their death is heroic and the loss is immense. Chang Cheh built a career on this kind of heroic bloodshed, but the wartime backdrop makes this one feel quite different.

The setting also lends a unique feel to the action. In addition to the usual war elements, there is a specific focus on the use of grenades. Grenades were a big part of the men’s success in holding the location, and Chang Cheh does a great job at communicating their importance throughout the film. The other distinctive combat element is the usage of bayonets wielded like swords, slashing and stabbing enemies with equal measure, while the Japanese soldiers wield samurai swords. Chen Kuan-Tai’s character carries around a Chinese Broadsword in honor of his past, and this results in a great sword fight between Chen and Gordon Liu mid-way through the film. There’s a similar use of bayonets and guns in parts of Chang’s 1971 film The Anonymous Heroes, but in 7-Man Army, it is the star of the action.

With Lau Kar-Leung off making his own films, and Tang Chia back in Hong Kong working with Chor Yuen and others, the choreography of 7-Man Army was handled by Chan San-Yat & Hsieh Hsing, a pair of veteran choreographers from in the Taiwanese film industry. They came on-board with Shaw on Marco Polo, and worked with Chang Cheh on many films during this period, including Shaolin Temple and Magnificent Wanderers. Chan San-Yat also worked as a choreographer with Lo Wei’s company on the early Jackie Chan films The Killer Meteors and To Kill With Intrigue. Anyway, Chan and Hsieh do a great job bringing a wide diversity of action to the screen in 7-Man Army. From war battles to sword fighting, to just good ol’ kung fu, 7-Man Army has a little bit of everything (even some Peking opera!).

7-Man Army isn’t a masterpiece, but it is incredibly entertaining. Some of the assaults on the fort can become repetitive, but for the most part, the action is varied enough to fight this off. The Mongolian attack is somewhat anti-climactic because it features all the guys you’d normally see in the finale against our heroes (Leung Kar-Yan, Johnny Wang Lung-Wei, Gordon Liu), but it is ultimately presented in this way for a good reason (as well as following the historical events). I imagine I’ll only grow to like this film more with repeated viewings, and I’d highly recommend it to any Shaw fan that is also a fan of war movies. It’s not quite up to the high standard of quality seen in Chang’s other pictures of the time, but it’s still a very fine and unique film worthy of attention in the vast Shaw catalog.