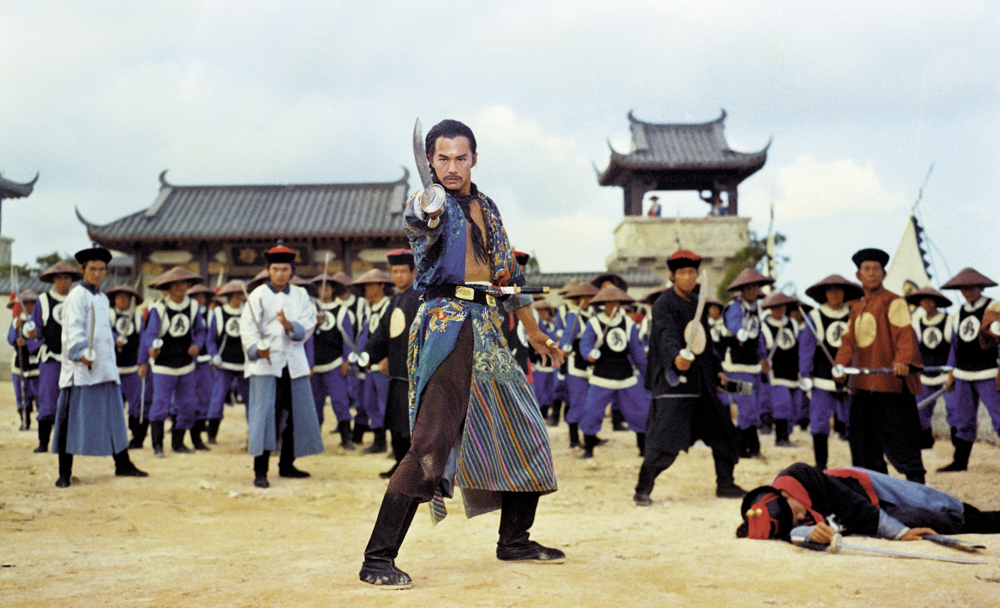 19 Aug Celebrating Ti Lung on his Birthday with Kim August

Posted at 01:17h in News by Celestial Pictures
Share

Many happy blessings to Ti Lung on his birthday!

Building upon last year’s celebratory article; this piece explores a few of the many martial arts forms and moves Ti Lung performed throughout his swordplay filmography at Shaw Brothers.

Superb execution of kung fu is why he portrayed so many Instructor or Master characters; Ti Lung devoted himself to martial arts as much as drama. For this Shaw Brothers legend, kung fu was often the physical side of the persona; however, these martial skills never overshadow the man beneath that fury.

The list below focuses on prime martial moments from a few of Ti’s  wonderful swordplay and kung fu movies for the studio. Note: Only the film where techniques are discussed are listed for those characters who appear in several movies.

Xiao Shiyi Lang (Swordsman and Enchantress) – The rogue but noble Xiao proves to be a massive thorn in Little Lords’ side as Xiao thwarts his adversary’s flying blades and sword with ease. The same is true in this hero’s duels against Mr. Lian. Calling upon an almost supernatural agility, wielding spear and sword or even bare-handed, Xiao’s mastery of short and long range blows are constant against his many foes. One unique move: Xiao disarms Mr. Lian with his feet! 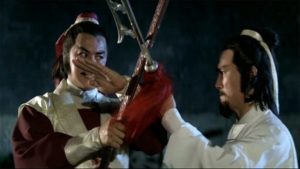 Tuan Chang-Qing, The Deadly Breaking Sword (The Deadly Breaking Sword) – As his nickname says, the final move in Tuan’s signature sword style frequently renders his opponents dead. Sneer all you like, but this swordsman’s last strike, as displayed upon the Sword Spirit Duo among others, is quite impressive. Unlike other Ti Lung swordsmen, part of Tuan’s martial strategy includes verbal taunts meant to startle his opponents just long enough for this haughty duelist to live up to his nickname.

Wu Sung (The Delightful Forest) – As befitting a martial arts instructor, Wu is equally at home bare-handed, as he is with weapons and various objects. A profound kicker, those on the receiving end of Wu’s Mandarin Duck Kick often die soon after. Binding him in a cangue turns out to be an epic mistake, as Wu easily deflects and delivers blows while bound (see the Wine Bar incident for more.)

Instructor Wang Yang (The Kung Fu Instructor) – It would be no boast to say every shot of Ti Lung performing kung fu in this movie is a prime moment. From his beautiful display of the Shaolin Rod to superb bare hand, kicking skills and sword maneuvers, The Kung Fu Instructor is a tour de force for the actor. An early scene reveals how Master Wang Yang holds his own against a trio of disgruntled kung fu masters: deploying fist, feet, sword, and rod Master Wang defends his honor. Despite being injured, he gives this trio a licking. For a pure example of just how potent the Shaolin rod can be, watch Wang take on the man who framed him, as he battles against the villains’ double hook swords.

Chu Liu Xiang (Perils of the Sentimental Swordsman) – General Chu can match any opponent’s blows, but like Wu Sung proves to be a deadly kicker, swordsman, and master of the fan. Against Roaming Soul (a denizen of Bat Island), Chu delivers a two point leg strike, before a final powerful kick hurls the would-be assassin to his death. Like Wu Sung, Chu Liu Xiang can quickly adapt to any weapon too: note his use of the enemy’s trident especially in the finale of Perils.

Fu Hung Hsueh (The Magic Blade) – I dig this Eastwoodesque swordsman’s fight style where speed, agility and the angle of the blow mean life or death. You can see just why this character was the man to beat in the Jiang Hu throughout his three cinematic adventures, but Fu’s signature style of rapid strikes and flips is instantly apparent when he faces off against the “Chien” formation in The Magic Blade. 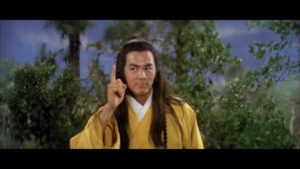 Dao Xing (Shaolin Prince) – Amid the mirth and silliness, the prince who would rather be a Shaolin monk learns the secret technique of Scripture of the Sinews from his seemingly bumbling masters. Throughout you see Ti perform a variety of kung fu that is second nature to him: fists, weapons, flips, kicks.  The moments where Dao practices Qi Gong and the exorcism fight are among my favorites. Any time Dao fights here, it’s enchanting as Ti plays it for laughs. Watching him and Derek Yee dispatch Pai Pao is another highlight.

There are many beautiful martial performances in Ti Lung’s storied career. It is a joy to watch him become different men and unleash a multitude of fighting styles that make each character so memorable. It is this commitment to excellence which reinforces just how important Ti Lung is to the Shaw Brothers pantheon.

Thank you for making kung fu so much fun to watch sir!

When not flexing her Pen Fu for ShawBrothersUniverse.com, Kim August can be found writing, ruminating and drawing on her Shaw-centric blog.